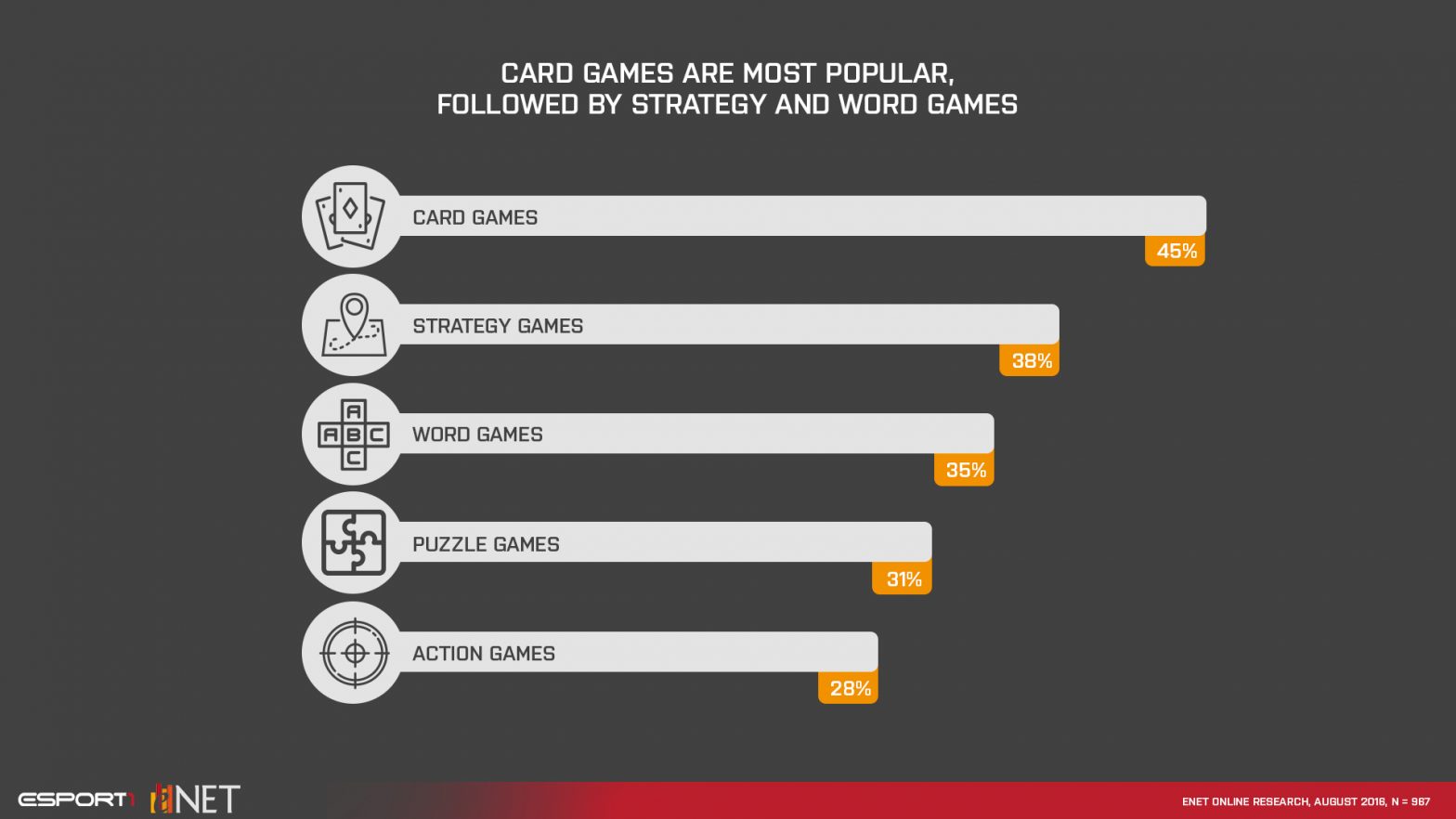 The gamer inside us

Six out of ten Internet users in Hungary play video games (including any game played on electronic devices, i.e. computers, smartphones, tablets, consoles, or TVs). This activity extends well beyond hardcore gaming: the most popular video games are Solitaire, Mahjong, Candy Crush Saga and Scrabble. Fifty-six per cent of gamers play on their smartphones (too) – these are the findings of eNET Internet Research Ltd’s latest survey on video gaming habits in Hungary.

Homo ludens on the Internet

Internet users are playful folks: as much as 92% of adults who use the Internet at least weekly play games in some form. They still prefer conventional games, but video gaming is rapidly gaining ground, with six out of ten people playing on some electronic device.

The notion of video gaming conjures the image of an adolescent riddled with spots, sitting all alone in their room, staring at the screen with red eyes, with hardly any interaction with the world, let alone their family. But this stereotype does not seem to have a basis any longer. Have you used public transport recently? Just look around: sure, browsing the net is cool, but most people while away the travelling time with short games played on mobile phones. And feel free to raise your hand if your father, mother, mother-in-law or grandfather spends hours playing Mahjong or Solitaire on their home computer…

I game, you game, they game

Playing video games has become a universal pastime: based on demographic data such as gender, age, education or place of residence, video gamers do not significantly differ from average Internet users. While men are somewhat more open to gaming than women, and it’s primarily people under 40 who play video games, no age bracket is immune – gaming has established a stable fan base across the whole of society.

The dynamic proliferation of electronic devices in general and smartphones in particular obviously plays a role in this change: 56% of video gamers play on their smartphones (as well). Of course devices with smaller screens allow for different types of games than conventional computers, and new games gain popularity as the range of devices changes. Games themselves vary largely, too: the games that are played by the most users are not the ones typically associated with “hard gaming” –  instead, they are card, strategy or word games. Among individual options, Solitaire, Mahjong, Candy Crush Saga and Scrabble are the most popular.

Perhaps because measurements are taken from such a wide array of people, we don’t generally find video gaming to take up hours every day: for 60% of video gamers, time spent on playing  does not exceed two hours weekly. Nevertheless, highly skilled and committed hardcore gamers who devote more time to this activity do exist: 25% of gamers play daily, and nearly 10% spend more than 10 hours a week on video games.

Although the number of video gamers is increasing, most people still associate the notion with hardcore gaming, and treats it accordingly. The field is burdened by negative stereotypes: games are considered aggressive, a waste of time, and a threat to school results, and gamers themselves are perceived as sedentary people who find it hard to establish human relations.Gaming in figures

Although smartphones are the most widely used platform for playing video games, it is desktop and laptop computers that Internet users expect the most to be suitable for gaming. Video games constitute a huge market: 12% of Internet users (i.e. some 600,000 people) buy hardware or peripherals due to video game requirements. However, gamers try to minimise their spending on the actual games: almost half of them play online, 34% download games played on smartphones or tablets from app stores, and 26% download games from dedicated web sites.

More than half (53%) of all gamers spend no money on video games, and even those who do, only spend a little: on average, HUF 3,900 a year (~12 EUR). (This average includes those who do not spend at all.) However, even this limited spending adds up to a HUF 12.5 billion annual market for game producers and distributors.Children and gaming

Philip Zimbardo, a psychologist known in Hungary for his prison experiments and more recently for the Heroes Square project intended to change the pessimism of Hungarians, has written about boys and young men who detach from reality and do not study or work, but instead sit in their rooms playing video games for hours on end, in order to achieve the feeling of success and victory which would be much harder to attain in real life. This phenomenon has a detrimental psychological effect, and has adverse social and economic impacts as well. How much of an issue could this be in Hungary?

As discussed above, video gaming is becoming a pastime spanning several generations and characterising the entire society. For now, however, parents are not too keen on seeing their children play video games: when presented with a choice of 10 different types of games and toys (including board games, stuffed animals, sports, building blocks etc.), parents selected computer and console games the least often as items bought for their children.

Still, half of the children of Internet-using parents do play video games of some sort. As much as 70% of children above 10 and in fact 20% of children between the ages of 0 and 5 engage in such activities. The proliferation of electronic devices affects children as well, as they are especially attracted to gadgets. 57% of the children of Internet-using parents own some sort of digital devices (smartphones, tablets, desktop or notebook computers, or game consoles). Most children play on smartphones, but PCs and tablets are also popular. Two out of three parents with children playing video games limit the time allowed for gaming. Children who do play video games spend an average of 37 minutes per day during the school term (between September and June), and an average of 90 minutes per day during the summer holidays on gaming. Children’s expenditures on video games are controlled even more stringently, as 95% of the youngsters who play must not pay for games at all.

Time for a fresh perspective

Hungarians are still apt to identify video games with hardcore gaming, and relate to it based on stereotypes. Parents place strict controls on the time and money their children may spend on this activity. But gaming continues to spread across the whole society, and by now the emphasis has actually shifted to casual gaming. As a result, perhaps society will become more accepting towards video games, and will be able to acknowledge and utilise the positive effects, for example in language learning, developing fine motor skills or concentration, and at workplaces as gamification gains ground. The time has arrived to look at this issue with fresh eyes, and finally take notice of the gamers lurking around and inside us.

About the survey: 967 Internet users over 18 years of age were surveyed by eNET in August 2016. The survey was conducted via the online research community Veva.hu. The results are representative of the views of Hungarian internet users aged 18+ in terms of sex, age and region.