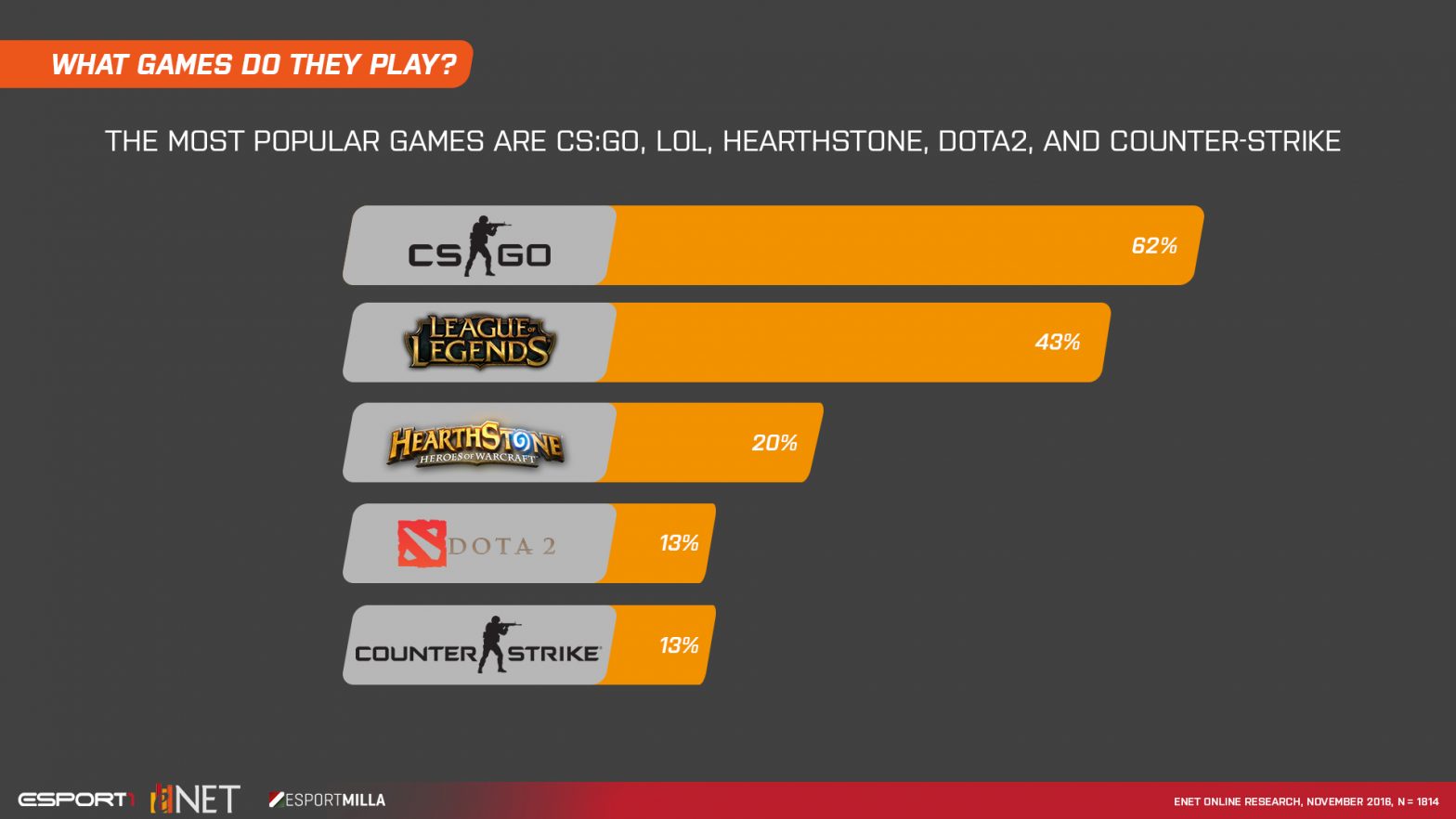 On an average weekday, a young Hungarian e-sport gamer spends three hours playing games, and that duration rises to five hours on weekends. 44% are or intend to become competitive players. The most popular game is Counter-Strike: Global Offensive. These are the main conclusions of a survey looking into e-sports in Hungary, jointly conducted by eNET Internet Research, Esportmilla – One Million People for Hungarian E-Sports, and Esport1.

If the subject of e-sports comes up in conversation, the first reaction is usually either perplexed silence or responses that are intended to be funny. And that is no wonder because, even amongst Internet users, only 25% have heard about e-sports. The popular judgement of professional video gaming is rather ambiguous: most people condemn the contestants who play video games for several hours a day, failing to understand why they “waste their time”. Meanwhile, a minority of mostly young people is interested in the stories of “easy success” by famed e-athletes. But there are other fields where the growing world of competitive gaming and their followers is watched with interest: the media and the games market. E-sports mean not only entertainment to many but also huge business. A fresh study by eNET Internet Research aims to identify the actual size of that business.

E-sports have a modest base in Hungary as yet: the total number of gamers, competitors and offline competition visitors is about 200,000. Video games in the broader sense (including all games played on digital devices) are played by almost as many women as men (52% males vs. 48% females), but nearly 95% of e-sport gamers are men. Hardcore video gaming is primarily attractive to young people: four out of five participants are younger than 25, and one third is below 18 years of age.

The first e-sport experiences are usually gathered as a child: half of the contestants started gaming between 11 and 15, and 16% in fact sooner than that. E-sports hardly ever fit in a person’s life above 30 years of age; only one per cent reported that.

Though there are several video gaming platforms, professional gamers mostly play on desktop computers. Only about 25% use laptop computers, and a mere 10% engage in e-sports using game consoles.

The three most popular e-sport games are CS:GO, LoL, and Hearthstone. CS:GO is more popular than LoL in all age brackets and across all education levels. But as age and education levels increase, the likelihood of playing any of these games goes down.

The e-sports community is a very active subculture whose members spend much time playing games. The average duration is three hours on weekdays and five hours on weekends. Streaming is an essential part of e-sports: almost all participants watch streams, and 10% also prepare streams. These are highly organised folks, with one in three e-sport gamers belonging to a group or organisation. And one third of the survey respondents have participated in offline e-sport events as visitors.

The world of professional competitors

E-sports are about gaming at a professional level. Some 16% of the e-sport gamers who participated in the survey currently play competitively, with another 29% claiming to have been competitive gamers before. But e-sports are the main income source to only 7% of those who consider themselves as competitors.

E-sport gamers play primarily for the competitive spirit and the possibility to develop their skills, but they also consider e-sports as a means of making money. Just as in conventional sports, training before a competition is the key element. In that period, a participant is likely to practice for 2-5 hours a day.

The number of competitive e-athletes is likely to rise as one fifth of the current e-sport gamers would like to go professional. But it’s not only pros that gaming offers opportunities to: four out of 10 respondents are willing to pay to a tutor who would help them develop in the game of their choice.

A new era of e-sports is likely to dawn in Hungary. It is clear that increasing attention is paid to the area, and market players are taking this segment more and more seriously. At the same time, prejudices against e-sports may well be alleviated.

About the survey: using a questionnaire shared in e-sports groups and on relevant web sites, eNET interviewed 1,814 e-sport gamers over 14 years of age in November 2016. The survey was conducted with contribution by Esport1 (http://esport1.hu) and Esportmilla (https://esportmilla.hu). The research supported by professional associations is comprehensive and covered all major Hungarian e-sports sites, but is not statistically representative of the views of e-sport gamers in terms of classic demographic factors such as gender, age, education and region.