The development of the online classified ads market originates from Craigslist in the United States in 1995. The outstanding success of Craigslist was due to the fact that it offered all kinds of advertisements for free except for three accentuated categories (real estate, job and personal). Not even eBay managed to break the popularity of Craigslist with the acquisition of some important actors of the market and launching its own service in the 2000s, thus, finally it gained a foothold principally in the European market. The burst of the dotcom bubble offered a second possibility to the printed newspapers in the classified ads market, however, in 2005, the online market recovered again and since 2006, the global, dynamic growth of the online classified ads market has been unbroken.

The appearance and rise of the online classified ads in Hungary was in line with the international trends, though with a bit of delay. In Hungary, classified ads were not given primary emphasis for a long time, while on the contrary, Vatera realized the possibility in the auction model in time, thus online auction, as an alternative marketing method gained a strong market position. In turn, two-third of the online classified ads market was appropriated by sites covering vertical markets, like ingatlan.com (in real estate) and használtauto.hu (in vehicle) or profession.hu (in job). Classified advertisement sites with general offers made headway in the market only in the past three years, when Jófogás.hu and Apród.hu were set off, although Expressz.hu existed even before. According to the research of eNET-CUB, the auctions seem to be gradually overshadowed in line with the headway of the small ads sites with mixed offers, large masses of users chose to use the small ads which are free of charge for them and offer substantially simpler use.

General small ads sites, with the exception of Expressz, presently operate without any business model and are engaged in fighting for better market positions among each other and collecting the greatest mass of users possible. Competition takes place in more areas, general sites compete not only with each other but also attract more and more advertisers and customers from the sites that previously unambiguously dominated the thematic small ads market segments.

The performance of a business is best shown to its owners by the after-tax income. However, online actors in the classified advertisement market do not yet have any business model generating significant income in Hungary. However, irrespectively of the incomes, the prevailing number of advertisements, the composition and actuality of the ads and the number of visitors of certain sites are proper indexes for evaluation. Let us see them!

The number and composition of advertisements: the real basis of growth

The best and most convincing criteria of size, even for outsiders, is probably the number of advertisements. At first, both Apród and Jófogás wanted to grow as big as possible, keeping in mind that growth should not go at the expense of the quality of the advertisements. It is important that the advertisements have to be relevant, they should be categorized correctly with proper wording,  and only active advertisements should appear on the search list.

The relevance of the advertisements can be expressed by the date of their publication and the time elapsed since then. eNET-CUB made a survey at both sites in August 2013, and categorized the results by period of publication:

Although, regarding the number of advertisements the two sites are neck and neck, the share of the ads is more ideal in the case of Apród. For instance, on Apród we found more than 1 million advertisements not older than one week, while on Jófogás, there were only 81 thousand of them. Having surveyed the other categories as well, we can state that Apród owns the more recent and therefore the more relevant advertisements.

Beside the publication date of the advertisements their share by categories can also explain the market leading position. In this regard, the traditionally most important categories on the advertisement market, like real estate, vehicle and job display different images. Real estate has priority in the case of both sites, however, Apród has almost 200 thousand more advertisements in this category. In turn, concerning vehicles, Jófogás can show up almost more than 100 thousand advertisements more than the other site. On the online classified advertisement market, aiming at both the demand and supply segment of the job market, mainly the so-called blue-collar positions are represented, thus, the two sites examined do not compete with the offers of the great job boards neither in terms of profile nor target group.

* Including items and parts.

** The “home” category includes different group of products on the two sites, thus, in the case of Apród, we added all those categories in this group that are included in “home” category on Jófogás, while found in other main categories on Apród.

The other factor that can be examined externally is the number of visitors. As neither of the two sites can be found among the publicly available data of the official Hungarian Internet audience measurement, Gemius/Ipsos Audience, we decided to use the data of Similar Web.

According to the measurements, the number of visitors to Jófogás and Apród moved closely together until last August, while starting from autumn, a growing distance has been seen in favor of Apród. The outstanding period of the diagram is due to the Christmas season, which is traditionally the most intensive period in the life of the e-traders, and in generally of all traders. 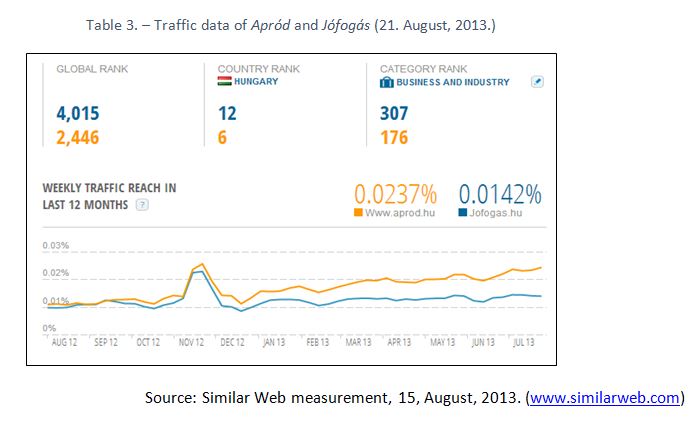 In Summer 2013, Apród is the market leader

According to our research, it is clearly seen that two really big actors dominate the competition: Jófogás, with Norwegian background, but starting from scratch in Hungary, and Allegroup of South African ownership, which can be considered as a well-prepared player in the Hungarian market, and which deliberately redirects its consumer to consumer (C2C) trade from Vatera towards Apród. Based on the results introduced, measured in summer 2013, Apród can be considered the present market leader in Hungary. It is justified by the quality, the composition and relevance of offers as well as the number of visitors.