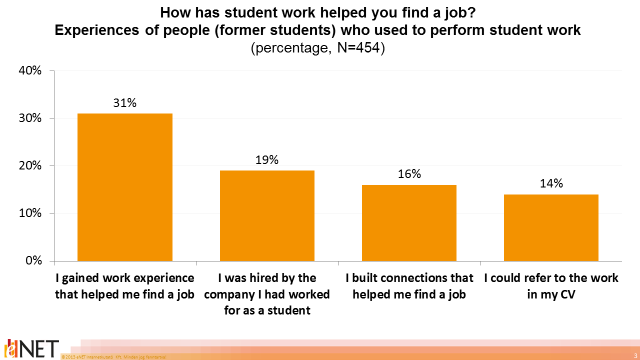 For several generations, student work has been the first step towards a young person’s career; an entry ticket to the world of work which not only provides financial benefits but also useful work experience, personal connections, and references to be shown off in one’s CV.

Student work: the “school of life” for several generations

The tradition of working besides studying has been present in Hungarian society for generations; 54% of those respondents who are active wage-earners claim to have worked already in their student years, and as many as 65% of pensioners report that.

Student work includes a wide range of activities and young people do take advantage of the various opportunities, as 36% claim to have done summer work, and the same ratio of respondents performs or has performed temporary work in study periods. In fact, three out of 10 students (28%) are not content with temporary or seasonal work but hold or held a part-time job continuously besides studying. One tenth has worked for a few weeks or months, while 13% have been interns for at least three months. Another 8% contribute or has contributed to a family business while studying.

It’s not only about the money

Understandably enough, earning money is the prime motivation for student work, but it is far from the only one. Gaining general work experience and special practice (in one’s profession) is another strong motivation factor. Young people have also recognised that work performed besides their studies looks good in their CVs and provides references to future employers.

Importance of arguments for student work
(average ratings by student workers on a scale of 1 to 5, where 1 = not important at all, and 5 = very important; N=50)

Student work is predictable and friendly

Students consider the work conditions generally satisfactory, as indicated by the fact that the average rating of all examined factors was better than medium. The work is considered predictable and easy to schedule, which can be a major consideration for people who must adjust their activities to their studies. Co-workers are deemed helpful and the workplace atmosphere positive. It is these factors that our respondents were the most satisfied with. But their opinion on the work time and the actual tasks, the daily and weekly work schedule, and access to the workplace was almost as good. Students were slightly less happy with the remuneration, but even that factor was rated clearly higher than medium.

It helps you land a job – experience of former student workers

Reports by active wage earners who used to do student work confirm the hopes of current students. Many of those who do not study any more but worked during their studies claim that student work has helped them get a job. The highest percentage (31%) of respondents says that the work experience has helped them find employment. And one fifth (19%) saw an even more direct connection between student work and a subsequent career as they were hired by the very company that they had worked for during their studies. Within these, 16% claim to have established relations that helped them land a job, and 14% considered the inclusion of student work in their CVs as an advantage.

About 60% of those parents who have children in higher education say that one or more of their offspring work during their studies.

The parents of university students obviously consider it useful if their children work during their studies. This was evaluated on a scale of 1 to 7, which allows for more accurate assessment than the usual “school grades” of 1 to 5. About half of the respondents indicated clear commitment to student work. Half (51%) of the parents of adult children unequivocally deem student work positive because it gives work experience, and almost as many people (48%) think that student work will help their children create a network of connections.

In summary, the role of student work is not limited to supporting a student’s finances; it is also an important opportunity to gain experience and build connections, thus helping the start of a career once the studies are concluded. It is a practice that is useful to both students and their future employers.