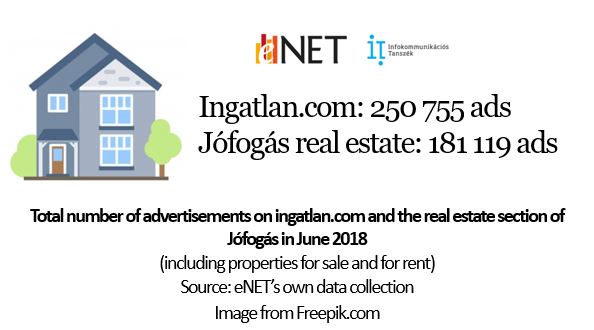 The methodology devised by eNET-CUB is based on the effectiveness of a classified ad, which depends on many factors such as the quality and quantity of photos, or the completeness of the text. As the methodology focuses on indicators that are not influenced by qualitative factors, it is suitable to objectively assess the activity of the parties involved. The indicators used are the following: number and up-to-dateness of ads, site visits, and operating profits. The full study is available at the following link in Hungarian:
Ha apróhirdetés, akkor Jófogás, ha ingatlanhirdetés, akkor ingatlan.com
Szegmentáció az online apróhirdetési piacon, fókuszban az ingatlanhirdetések

If it’s classified ads, then Jófogás; if it’s real estate ads, then ingatlan.com

But how about the market of vertical ads? In view of the boom seen in the real estate market in recent years, eNET-CUB focused on that market segment in their latest research.Of the sites showing real estate advertisements (as well), eNET-CUB examined the two largest players, i.e. ingatlan.com and the real estate section of Jófogás. As to the number of advertisements, the number of ads on each of these two sites had been 500,000, in 2016, but in both cases, these figures have declined significantly by this year. The reasons may include major database cleaning or higher demand, which results in faster transactions and consequently shorter active advertisement periods.

Even though the general classified ads market is ruled by Jófogás, ingatlan.com takes the lead based on the number of advertisements: in June 2018, that site featured 250,755 properties for sale or rent, while Jófogás had “only” 181,119.

Besides the number of ads, their up-to-dateness is of key importance, especially to buyers who don’t like to spend their time browsing ads for homes that are no longer actually available. Jófogás changed its policy in 2014 and claims to archive ads older than 90 days, but the rules are not always in line with reality. On ingatlan.com, 88% of the advertisements were posted in the past seven days and none of the ads are older than 90 days, but in the real estate section of Jófogás, only 26% of the ads are 0-7 days old, and the share of items posted more than three months ago is 7.38%. All in all, ingatlan.com has more up-to date advertisements in all categories than its competitor.The real estate section of Jófogás has many more old ads (13,332 posted over 90 days ago) – which should in theory not be displayed at all – than all other sections in total (5,175). This renders it difficult to compare the figures with the data of other real property advertisement sites, and also makes life hard for visitors; an ad that is old or has not been modified for long is more likely to have lost its relevance.

As to the calculation of operating profits, the revenues generated by each site cannot be quantified because of the multitude of portfolios that each company has. According to previous researches by eNET-CUB, Schibsted Classified Media Hungary Kft, the company that runs Jófogás, made a loss exceeding HUF 1 billion in both 2014 and 2015. Even though Schibsted acquired the hugely profitable used car advertisement site hasznaltauto.hu in 2014, the figures available on the Justice Ministry’s Electronic Reporting Portal still indicate a loss (HUF -71,462,000 after-tax earnings) for 2017. Meanwhile, the after-tax profit of ingatlan.com Zrt rose from HUF 168,998,000 in 2016 to HUF 419,095,000 in the following year. The expansion of the company’s portfolio in 2015 could have been one reason for the higher profitability: bankracio.hu, an online collection of the best loan offers, was bought, along with iroda.hu, a site helping those who want to find office space.

While Jófogás is first in the overall online classified ads market, it is relegated to second position in the vertical market: ingatlan.com clearly led the market segment of online real estate advertisements in the examined period in terms of the number and up-to-dateness of ads, and also based on operating earnings.

(The Similar Web traffic monitoring service considers the real estate section of Jófogás as a sub-category, so its figures are not stated separately. This prevents the comparison of the two market players’ site visit data.)eNET-CUB have already analysed Hungary’s online classified ads market. Links to the previous studies: