The fight for supremacy on the market of online classified advertisements continues in 2014. In fact, the market was stirred up again in the past month. A new competitive phase started with important announcements by the two largest players. Schibsted made acquisitions, while aprod.hu launched a renaming campaign. These changes warrant another look at Hungary’s online classified advertisement market by eNET and the Department of Information and Communication of Corvinus University of Budapest.

Schibsted Classified Media Hungary Kft., the company that owns the classified ad site jofogas.hu, announced in mid-March 2014 that it had acquired the online advertisement business line of Turkish-owned Expressz, a traditional classified ad publication company that could not replicate its success on the printed publication market in the online environment, and could not keep up with the huge marketing budgets of the two largest market players. Thus Expressz was relegated to the third position. At the time of the acquisition, about 400,000 ads were posted on the online interface of Expressz, most of which have since been transferred to jofogas.hu. But the expansion of the Scandinavian media company’s portfolio in Hungary went further: Schibsted also bought the used vehicle ad site hasznaltauto.hu. This acquisition has no direct impact on the advertisement database of jofogas.hu because the two sites will continue to operate independently; however, the acquisition is definitely significant as hasznaltauto.hu is a key player in the important market segment of second-hand vehicles.

Meanwhile, the other large player on the general classified ads market is not resting on its laurels either. The site previously known as aprod.hu continues as olx.hu from April 14, 2014.  Although hardly known in Hungary yet, the OLX brand is used in 40 languages and 107 countries. The renaming is not limited to our country; in Romania, the familiar Mercador brand was replaced. The move seems surprising in view of the billions of forints spent on building and promoting the aprod.hu brand in the fierce competition with jofogas.hu. The reason lies in the owner’s interests: the South African media giant Naspers wants to create an internationally unified OLX brand. The users of aprod.hu are reassured that the site remains unchanged in design and operation.

There can be only one

Whatever the segment, becoming and remaining the market leader are major goals of every company because that is the best way to monetise the user base, i.e. to generate revenues and, consequently, profits.  The no. 1 player sets the rules and defines the business model that provides the most income. Market leadership is necessary to turn users – fought for and acquired at huge marketing costs – into potential paying customers.

Currently, no market player can generate major revenues; both competitors invest huge amounts in building a user base and a recognised brand. The income / expenditure data of aprod.hu / olx.hu are unknown because of the owner Allegro Group’s unified portfolio management method. The profit and loss statement of Schibsted Classified Media Hungary Kft. for 2012 shows jofogas.hu only, and the figures indicate a net loss over HUF 1 billion, even though the owner is a major market player.

Based on a similar monetisation level and advertisement volumes, OLX presumably makes a significant annual loss as well – which can of course be interpreted as an investment by the owners.

Link to the study: eNET-CUB – The online small ads market is not even so small

Normally, the performance of a company with a strong business model can be best justified by its financial results. However, judging a player on the Hungarian online classified ad market by those standards would not lead to a realistic evaluation.

In lack of an opportunity for financial analysis, eNET and the Corvinus University of Budapest (hereafter: eNET-CUB) worked out a comprehensive methodology in the autumn of 2013 for the assessment of market players based on objective criteria.

The methodology was prepared in view of the fact that no two advertisements are the same regarding their content or quality. Effectiveness, i.e. the fast sale of the product advertised, depends on several factors including the quantity and quality of photos, and the comprehensiveness of the text. From this perspective, the effectiveness of the two sites cannot be realistically judged by polling their users because it is impossible to ensure a standard ad quality. eNET-CUB’s methodology focuses on indicators not influenced by the quality of the advertisements, which allows for an objective evaluation of the activities of the two large market players, OLX.hu and jofogas.hu. The analysis of the Hungarian online classified advertisement market was done based on the ad dataset of two participants as of 4 April, 2014.

Number and age of advertisements

In order to estimate the size of the two players, the number of advertisements should be examined as it indirectly shows the underlying user base, and also affects the number of site visits. In last autumn’s review of the online classified ad market by eNET-CUB, the two players had been in a tie in this regard, but in early April 2014, OLX had 2.5 times as many ads as its competitor. This is partly attributable to a change in the companies’ policies; ads older than 90 days have been deleted. This resulted in a significant decrease in the number of advertisements on jofogas.hu. (Nevertheless, more than 100,000 ads older than 90 days were still found on the site at the time of measurement.)

In addition to the number of ads, their age should also be taken into consideration; whether an advertisement is still timely is of major importance to both counterparties. Buyers want relevant, live ads for efficient search results (to avoid outdated advertisements). And as to sellers, irrelevant ads deflect buyers’ attention from their live ads. So both parties benefit from the deletion of outdated ads. However, despite this policy, 13% of the ads on jofogas.hu were still older than 90 days at the time of measurement. The stock is much younger on OLX: 56% of the ads are less than 7 days old. This ratio is much higher than the competitor’s 11% figure.

There are three categories on the online classified ad market that are traditionally busier than others: jobs, real estate, and vehicles. These sectors are also served by specialised, dedicated sites, so OLX and jofogas.hu do not only compete with each other in those areas. 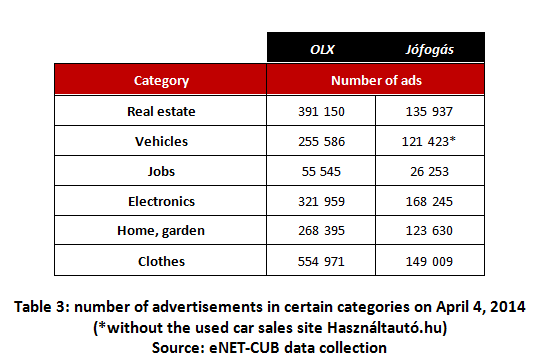 Based on the composition of the stock, OLX has more ads in all three key categories than the competing jofogas.hu, and also excels in other popular categories. Compared to last autumn, OLX had improved much, with more ads in the real estate, job, electronics and clothing categories, while jofogas.hu was better in the vehicle and home sectors.

The number of visits provides a realistic picture of a site’s user base. The analysis below is based on data from Similar Web because no credible, comparable and public site visit information is available in Hungary. The rankings show the results of aprod.hu (and not the successor olx.hu); due to the recent renaming, this is the only way to analyse historical site visit figures.

The number of weekly visitors puts OLX in the lead; in fact, that site’s advantage over jofogas.hu has recently increased slowly but steadily.

OLX was visited 15.7 million times in March 2014, while the figure measured for jofogas.hu was slightly less than half as much, 7.15 million. OLX dominated in terms of the time spent on the site as well. The bounce rate, however, was lower (better) at jofogas.hu.

Considering the data measured in early April based on the above methodology, it is clear that OLX (the former aprod.hu) remains the leader of the online classified ads market. However, whether the company can maintain its lead can be heavily influenced by users’ reactions to the renaming, and also on the ability of the competitor jofogas.hu to capitalise on the advantages offered by the acquisition of expressz.hu. The ultimate winner of the competition in Hungary will be the player that can generate profits, a feat that Expressz pulled off for decades in the past.