Hungarian e-tailers have no reason to complain: as in previous years, the online retail trade volume increased considerably in 2014. The total volume should reach HUF 266 billion (~ € 850 million) by the end of 2014, ushering in a period of steeper growth. According to eNET’s first mid-term forecast, experts are optimistic, projecting a fast-growth scenario for 2014 and beyond.

The annual online retail trade turnover is an avidly anticipated figure every year. For 2013, the magic number was HUF 217 billion (~ € 731 million) which was 3.1% of Hungary’s total retail trade volume. Now the question is how the sector performs in 2014 and what is expected in the near future. eNET has just completed a mid-term projection for the period 2014-2018, using macro-economic and micro-simulation models as well as information on the expected general economic environment. Three scenarios arose: an optimistic, an adverse, and a realistic one. In view of current developments in Hungary’s retail e-commerce, eNET’s experts vote for the optimistic scenario for 2014, which forecasts a HUF 266 billion volume, HUF 49 billion (~ € 157 million) or 22.5% higher than in 2013. 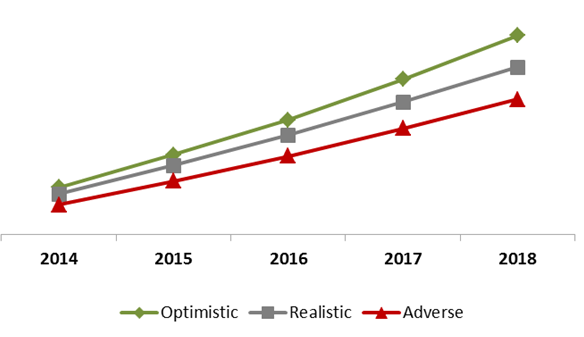 The projections are based on a quantitative model involving both the expectations of market players and macro-economic indicators (in order to assess the expected demand). Growth is forecast in all three scenarios; the difference lies in the expected pace of expansion. The margin between the scenarios increases over time: i.e. the projected trade volume figures across the various scenarios are very close for 2014 but rather far apart for 2018.

eNET Internet Research and Consulting Ltd has been researching the retail e-commerce sector since 2001, and the results are definitely promising. The market is expanding steadily, exceeding expectations every year since the beginning. Specifically, the period between 2001 and 2013 was characterised by four growth phases:

The question is whether the fast market expansion will continue in 2014 and thereafter, or the previous moderate growth will return. eNET expects the former scenario.

“Black Friday” deals offered in Hungarian webshops are a major novelty in this year’s online retail trade. While there had been similar initiatives before, they only became mainstream in 2014. The wide-ranging special offers and their popularity have been covered in various media. Many internet users jumped at the big discounts, generating HUF 2.3 – 2.7 billion (~ € 7.4 – 8.7 million) of business just on those few special days. But the faster overall market expansion is naturally not attributable to Black Friday deals only; they constitute one of the numerous contributing factors. Several large players entered the market in 2014 as well, generating considerable additional turnover; also, shopping habits are changing as people become increasingly confident to buy goods online. Finally, logistical innovations such as parcel delivery terminals have added even more convenient options to the range of delivery methods. And product categories that have been generating major business in more developed markets, such as clothing, baby products or toys, are increasing in popularity in Hungary, too.

The year 2015 certainly promises to be exciting in online retail trade. The market will continue to expand, partly for unexpected reasons. According to a recent draft law to take effect in March, all shops in Hungary, apart from family stores, will be closed on Sundays regardless of size. The impact of the new law on shopping habits is hard to predict as yet, but the upcoming legislation will certainly bring changes that all traders must consider. From the perspective of retail e-commerce, the question is whether online shops can take advantage of this development and attract Sunday shoppers. If they can, online retail trade in Hungary is in for a period of accelerated growth.