One in five Internet users has a tablet

In Hungary 21% of adult Internet users have tablets, and half of them use their devices to watch videos. Those users also appeared who watch live streaming television programs on tablets. But few are willing to pay for applications yet; the majority keeps only free apps installed on their smart devices. The latest research in eNET’s and Telekom’s “Report on the Internet Economy” series focuses on tablet usage habits in Hungary.

Tablets represent a recent stage of technological development. They are hybrid devices between conventional computers and smartphones, sharing some of the benefits of both categories. While a tablet is similarly portable as a mobile phone, it has a bigger screen, so it’s easier to handle and thus offers increased versatility.

Three tenths of tablet owners keep fewer than 10 applications on their devices, and somewhat more than one third (35%) have 11-20 apps. So two thirds use fewer than 20 apps, and only 7% of tablet users have more than 50. The number of apps actually used is even lower: 38% use fewer than six apps at least once a months, and another 38% use 6-10. Thus most of the downloaded applications are not used regularly.

Tablet-wielding adult Internet surfers primarily use applications in social media (62%). Apps for taking and viewing photos are also popular (50%), as well as applications helping users obtain information before and during shopping (47%), and online banking apps (46%). The least popular applications are those intended for reading books, newspapers and documents, as well as listening to music.

Youngsters use it, others are open 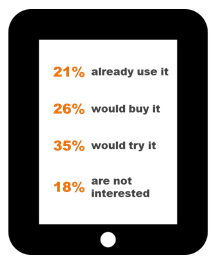 eNET’s survey conducted in January 2014 shows that one in five Internet-surfing adults (21%) has a tablet, which is definitely positive in view of the 51% smartphone penetration measured in the same group. Slightly more men than women use tablets, which confirms the notion, that males are more open to new technologies. However, the gender distribution has improved compared to eNET’s previous online research into mobile device usage habits in last September, where the ratio of women was much lower (40%). Concerning the users’ age, tablets are most popular among young people: 35% of Internet-surfing tablet owners are 18 – 29 years old, while 27% are in their thirties. Nearly two thirds (62%) of tablet users are active wage-earners, 10% are students, and 9% are pensioners. The remaining 19% are either unemployed or their status is different from all of the above.

Besides those who already have tablets, many do not own such devices yet but are planning to buy them in future. One in five adult Internet users has a tablet, and one in four would be willing to buy one. And 35% claim to have no intention to purchase such a gadget but are open to the idea of trying one. Only 18% of the interviewed adult Internet users are not interested in these devices.

Using a tablet to watch videos and read e-books

According to eNET’s research conducted in April 2014, in which tablet usage habits were also examined, one in two Internet-surfing tablet owners watches movies on his/her gadget. Even more people (72%) watch videos in general. About 32% use video viewing apps, and 40% watch videos on the net. The remaining 28% do not use their tablets for that purpose at all.

Streamed or pre-recorded TV programs are still rarely watched on tablets, but in an encouraging development, this activity has appeared in Hungary, too. Almost 25% of tablet owners watch TV programs recorded in advance, and 17% also watch streamed, “live” programs.

Thanks to the convenient screen size, reading e-books is another characteristic activity. Some 23% of those who read electronic books claim to do that on a tablet as well. And 18% of Internet-surfing adults plan to buy a tablet to read e-books in the near future. (eNET’s online e-book research, January 2014, Internet users aged 18+, N=1122).

Amongst adult Hungarian Internet users, one in five persons has a tablet. Most of the devices are based on the Android operating system. Even though the general willingness to pay for apps is low, now there is a group of Hungarians who are willing to spend money for that purpose. About 73% have never paid for an application, but 12% have bought more than three.

Device buying intentions indicate that the number of tablet owners will rise further in future; one important question is whether, and to what extent, these gadgets will replace laptops, e-book readers or even television sets.