In the first nine months of 2013, the turnover on Hungary’s bonus/coupon market reached HUF 4 billion. Market leader Bónusz Brigád gained a substantial advantage, distancing itself from competitors. The bonus/coupon market continues to expand; the next phase in its development could involve the transformation of market players into discount webshops.

In the first three quarters of 2013, the bonus/coupon market selling general merchandise reached an intermediated turnover of HUF 4 billion. On average, buyers saved 68% of the prices of the products and services offered; thus the actual value of the sales (without the discounts) exceeded HUF 12.4 billion. The total amount that customers saved thanks to bonus/coupon market players came to HUF 8.4 billion.

The consolidation experienced last year continued in 2013; the top 3 market players, namely Bónusz Brigád, Kupon Világ and Napi Tipp, further strengthened their positions at the expense of other market players. These three businesses generated a HUF 3.2 billion turnover (80% of the entire market) in the first nine months, and helped customers save HUF 7.2 billion. 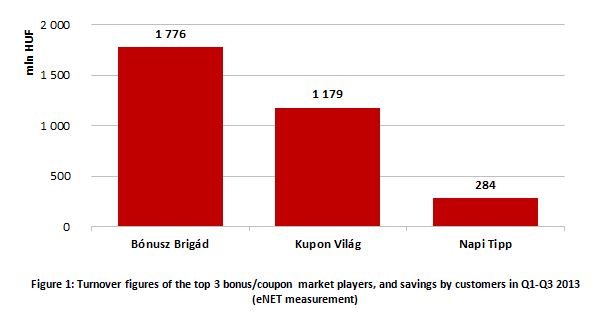 Based on the first nine months’ data, the relative positions of the largest players who control 80% of the total turnover have also started to change. Market leader Bónusz Brigád’s performance improved steadily; the company could significantly increase its lead over Kupon Világ. Bónusz Brigád’s 41% market share in Q1 reached 49% in the third quarter, while the market share of Kupon Világ declined from 32% to 28%. Meanwhile, the performance of Napi Tipp stagnated.

By the end of September 2013, 13,400 offers were announced, more than the 12,000 registered in 2012. In January-September, 736,000 bonuses/coupons were sold; 57% and 43% of these were related to services and products, respectively. The average value of the offers was HUF 11,800, slightly lower than in previous years; however, that can be attributed to the transformation of the market. This year, the share of products grew considerably within all goods sold, and the average value of tangible products is generally much lower than the price of services. The average purchase price of a bonus/coupon was HUF 5,400.

The top 3 market players have made 9,200 offers this year, which equals 69% of all offers. And 78% of the 736,000 bonus/coupon sales were connected to their activities. Bónusz Brigád took the lead concerning both the number of items sold and the number of offers made. The market leader offered three times as many deals as the second-placed Kupon Világ, and sold twice as many bonuses/coupons. 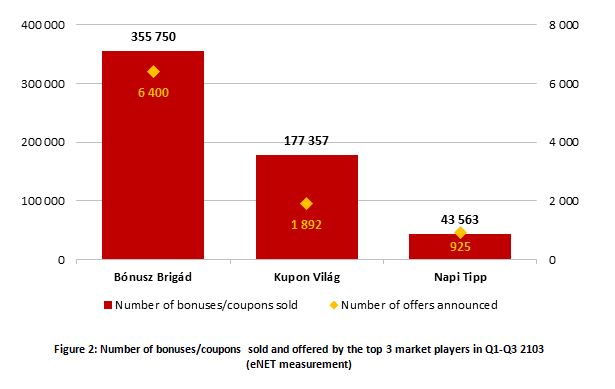 The key to the success of Bónusz Brigád is that users may rate the services and products purchased. The ratings are displayed with all new offers by the same service provider (“partner rating”). This system decreases the insecurity of buying a bonus/coupon from an unknown provider.

Services in the limelight

About 79% of the HUF 4 billion turnover generated in January-September came from the sale of services, while the remaining 21% was connected to products. Compared to the year-ago period, the share of products rose from 12% to almost 21%. Services totalled 68% of the offers announced, and 57% of the bonuses/coupons sold. While higher-valued services continue to generate much of the turnover, the share of products is gradually increasing, with more and more such bonus/coupon items added. Though the average price of a product is just half of that of a service, high sales volumes resulted in a considerable turnover of almost HUF 900 million.

Within services, the popularity of the various categories remains unchanged; travel offers generated the highest revenue in 2013, too. The second and third places are held by beauty care and health-related bonuses/coupons, respectively. 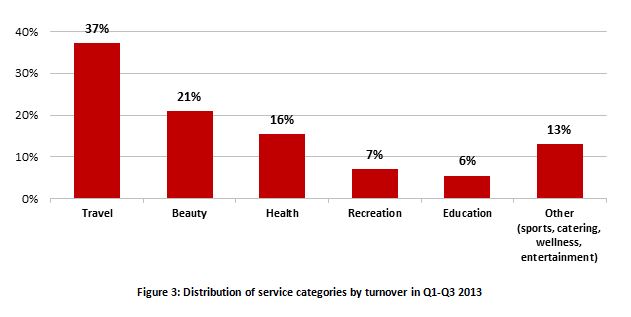 Bonus/coupon websites offering a general range of goods already sell a multitude of products and services. The current tendency indicates that the choice will continue to widen. In the process of market consolidation, major players are expected to transform into discount webshops.

Thanks to the ever-increasing range of offers, discount purchases are likely to gain importance in the upcoming Christmas season. Bonus/coupon websites allow customers to buy Christmas presents quickly and conveniently and at deeply discountes prices. The holiday buying binge may further boost the business of bonus/coupon sites.