The number of smartphone users in Hungary is 5.3 million, which equals 89% of all internet users in the country. As to device manufacturers, Samsung has maintained its strong position. Concerning the operating systems, Android clearly dominates. The number of people using a mobile internet connection has increased by 1.7 million to almost 4.5 million between 2017 and May 2019. The most popular daily activities performed with smartphones are browsing, online messaging via various applications, and social media usage. The latest iteration of eNET’s annual mobile phone research looks into the main smartphone usage trends.

According to online research conducted by eNET in May 2019, 89% of adult Hungarian internet users, i.e. close to 5.3 million people use smartphones. The number of smartphone users has increased by 800,000 since April 2017. 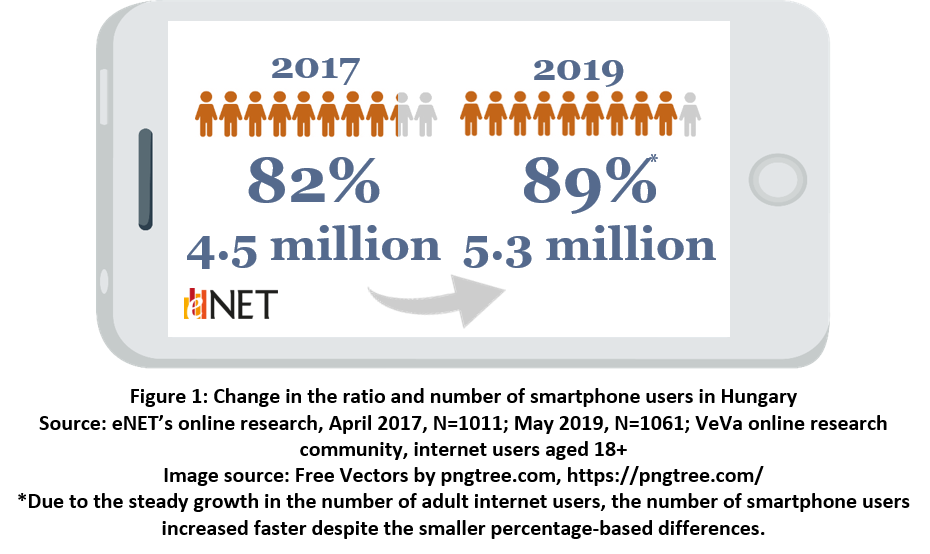 The major role that smartphones play in our lives is proven by a continuous increase in the number of people using such devices, and also by the way that we stick to our handsets. Some 71% of smartphone owners never turn off their devices, 55% keep their phones next to their bed at night, and 25% even take them to the toilet.

Regarding the operating system installed on the respondents’ phones, the dominance of Android is still unquestionable. In fact, the ratio of Android users has increased from 78% to 85% since 2017. The second place is held by iOS with 11%, followed by the 3% share of Windows Phone.

Concerning smartphone brands, Samsung leads (currently 34%), Huawei is second (23%), and Apple is third (11%). Huawei phones have proliferated the fastest in recent years in Hungary (too), but the United States blacklisted the Chinese company in the spring of 2019 (for example by banning Google services, which was to mean the loss of the Android operating system, too). The planned sanctions have meanwhile been withdrawn, so Huawei may continue using Android as the operating system of its handsets. But the Chinese company has developed its own operating system, dubbed Harmony OS, for various smart devices. The development of that system presumably continues behind the scenes, includes a range of proprietary applications. These efforts are aimed at preparing for any future sanctions by the United States, which may endanger Huawei’s second place among smartphone manufacturers in Hungary (and other countries, too).

According to eNET’s reseach, price is the main consideration when people buy a smartphone (85%), followed by technical features (82%), and the operating system (75%). So it’s questionable whether or not customers would stay with Huawei phones without Android.

Number of mobile internet users up by 1.7 million since 2017

The number of mobile internet connection users went up even faster, by 1.7 million to almost 4.5 million since April 2017. This latter figure equals 85% of the respondents.

Smartphones do it all

Is a phone good for phone calls only? Not according to smartphone owners. More and more of them use their devices for an increasing range of (online) activities, sometimes replacing their computers. The prime daily online activities are the following: browsing (72%), online messaging with an app (68%), and using social media (67%). 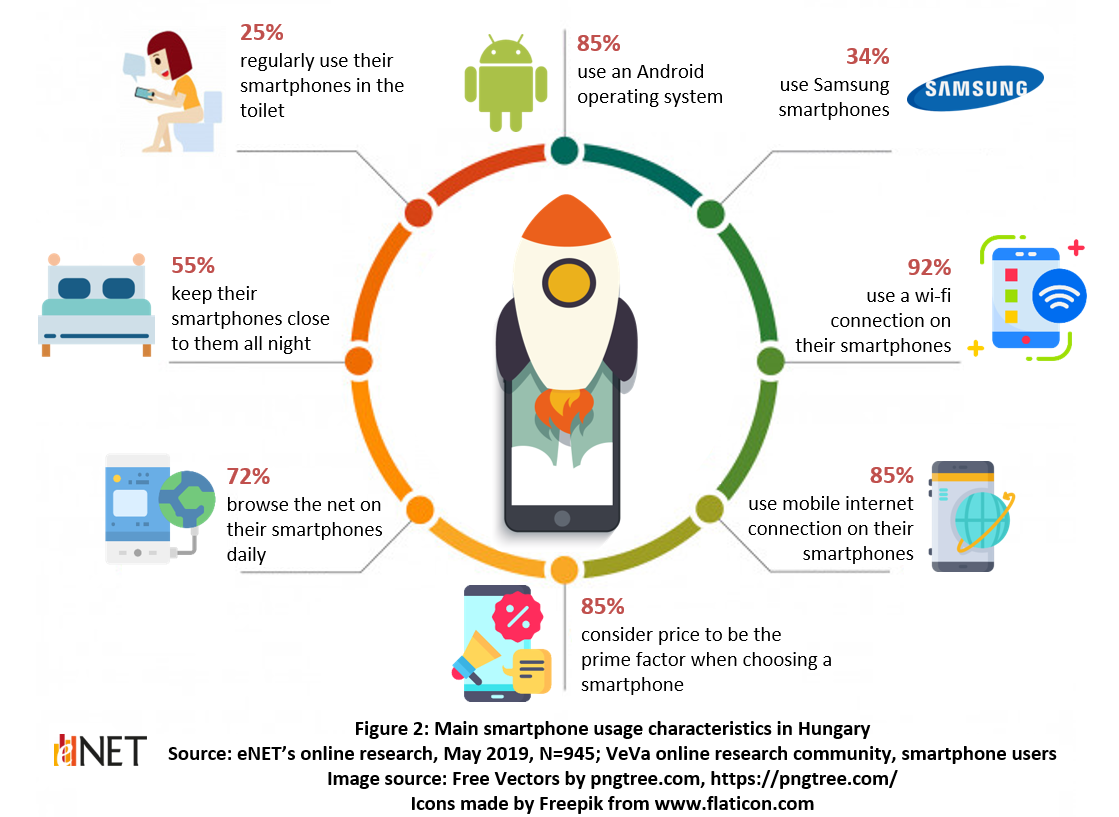 Smartphones have become the staple devices of our digital lives. They are always with us and, thanks to mobile internet access, they offer all popular functions whatever we need, replacing other digital devices. This opens new perspectives for Hungarian businesses as well, who can reach millions anywhere and anytime.

About the research on mobile phones: this research series has been regularly conducted by eNET Internet Research and Consulting Ltd since September 2013. The results are representative of the opinions of internet users over 18 years of age by gender, age and region. Since January 2014, the surveys have been conducted within eNET’s online panel, i.e. the online research community VeVa.

Sources of the study compiled in May 2019: