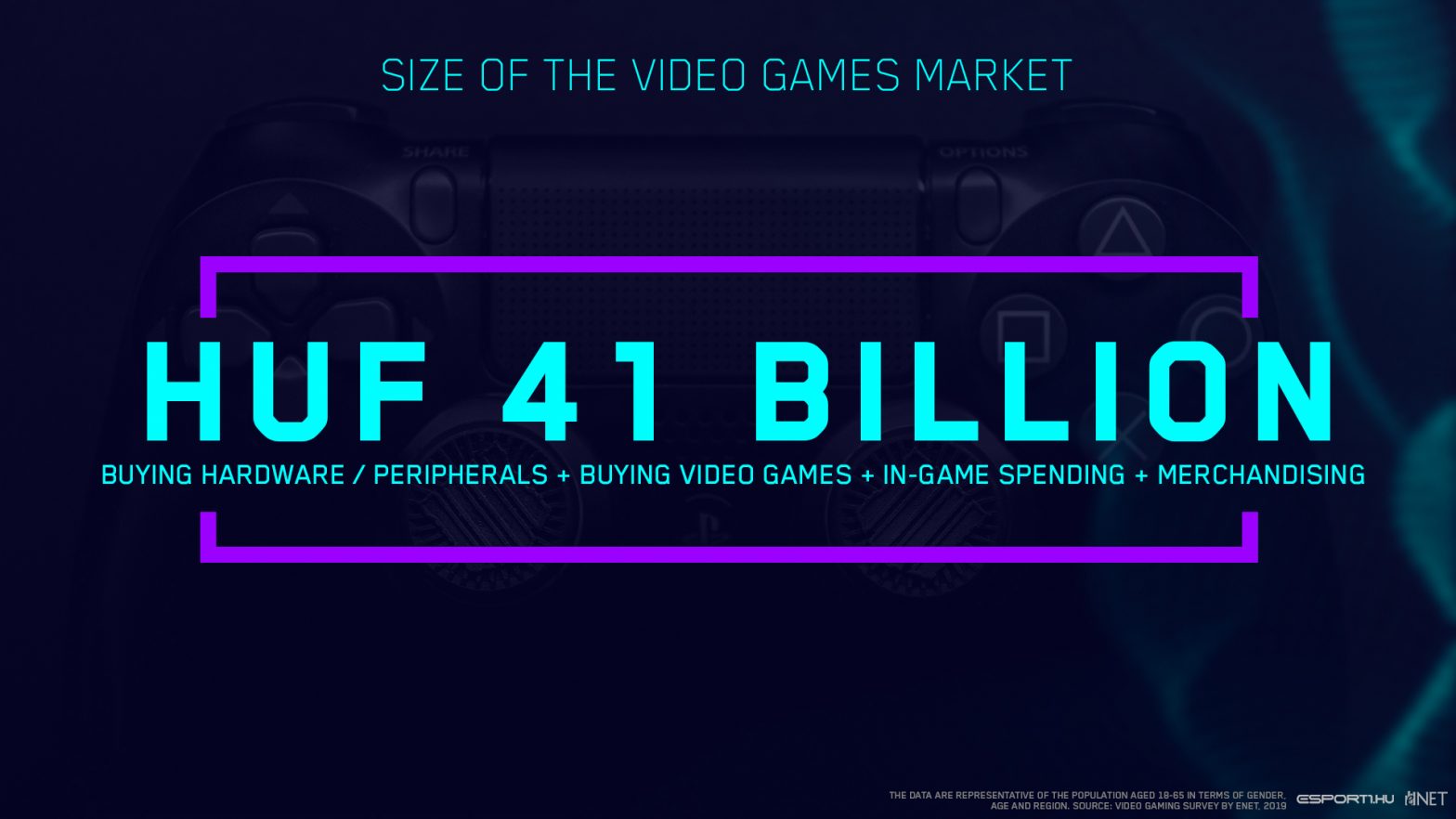 The share of video game players is high and stable, around 60%, in Hungary. This is the conclusion of a survey conducted for the third time by eNET in September 2018. The number of gamers has not grown considerably, but those who do play spend more and more money on video games as well as related hardware and peripherals. Meanwhile, the number of mobile phone users playing games is growing, so the position of smartphones as the no. 1 gaming platform is fortified.Video games as a popular pastime, not only for young males

Video games have their stable place in our everyday lives: as many as 3.7 million Hungarians played them in 2018 according to a survey. This may seem as a very high number but the category in the survey was used in a wide sense, including online and offline games played on mobile devices, PCs and consoles.

Two thirds of Hungarians aged 18-65 agree that video games are for all age groups. And this is more than an opinion, as proven by gamers’ age characteristics: while it’s true that the ratio of gamers is highest, 66%, in the age bracket of 18-25 years, more than half of older people also engage in this activity. More men like video games than women (62% of males play), but every second lady also plays video games.

As to the intensity of gaming and importance of video games in everyday life, the variation is significant. Stereotypically, one would consider a person a video gamer who spends hours a day with that pastime,  but reality is quite different now. Three quarters of video gamers play at least once a week, but for a relatively short time period. The largest group, 36% of the respondents, spend 1-2 hours a week with games, while 25% play for 3-5 hours. One quarter of those who play every week do so for up to one hour, usually to pass idle time while travelling or waiting.

However, there is a small but remarkable group to whom video gaming has an entirely different significance. They are most committed to video gaming, so they spend much more time engaging in that activity. About 2% of the population aged 18-65 play for more than 20 hours a week. This group is considered as Hungary’s hardcore gamers.

On the smartphone, at home, at work, even at night

Compared to 2017, the ratio of those who play video games on their smartphones grew from 54% to 65%. At the same time, fewer people play on their laptop computers. But the share of desktop PCs did not change much over the past one year, stagnating at 43%. Besides smartphones, consoles are also increasingly popular: 7% and 8% had chosen them in 2016 and 2017 respectively, but the same figure grew to 13% in 2018.

Afternoons and evenings are the typical gaming periods. One in five video gamers plays just before going to bed, and one in 10 even plays at night. Some 83% play at home in their free time. Waiting times are also typical opportunities for video games: 33% pass travel time in that way, and 30% play while waiting for vehicles. To a large group, video gaming is just an occasional pastime, as indicated by the fact that a mere 16% engage in this activity during holidays. About 15% even take their gaming device to the toilet, and one in 10 people takes time for this passion in school or at the workplace.

Various costs are associated with video gaming. Despite the fact that the largest group of gamers still opts for free software, the revenue generated by game purchases is significant. Also, video gaming boosts device purchases (mobile gadgets, hardware, peripherals). And in-game spending should also be noted, even though its magnitude is smaller. Last but not least, there is game merchandising, e.g. branded gifts and accessories. Within these products, Hungarian gamers spent the most, HUF 17.8 billion, on hardware and peripherals in 2018. But the total amount paid for video games was not much lower, HUF 16 billion. These two items total HUF 41 billion a year, which signifies the increasing economic significance of the video games market in Hungary.

And the future generation?

Children’s computer and internet usage is a sensitive issue to parents, and their fears are usually focused on video games. But despite the parental concerns, gaming is now part of the everyday lives of children: almost half (48%) of children below 18 years of age play video games. Boys are more avid gamers in this age group, too: 57% of them play, as opposed to 35% of girls.

Gaming by children is hotly debated. Consequently, parental control is quite strong, with 63% of parents limiting the time for which their children may play. About 47% of parents control the type of game played by their children, and 30% limit in-game spending. But 20% of gamer children’s parents define no limitations at all. Parental control of children’s video gaming has not changed much since 2016.

Gaming at the next level: e-sports

As explained above, video gaming is just a simple everyday pastime to many adults. But to others, it’s much more: a part of their identities, with major time and energy expenditures. These are hardcore gamers who play competitively and follow their favourite games and peers via streaming and social media. This group currently has about 425,000 members in Hungary. They will be discussed in the next analysis by eNET.

About the research: eNET interviewed 923 members (internet users older than 18 years) of the online research community VeVa.hu in September 2018. The results are representative of the views of adult Hungarian internet users by gender, age and region.