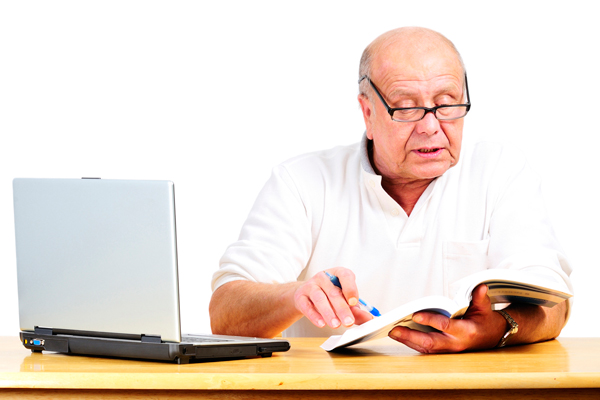 Young people get acquainted with information and communication devices very early, and find it easy to learn how to use them. But what comes naturally to the youth is a new and undiscovered world to older generations. Nevertheless, seniors have started to explore the digital world; for example, 10% of Internet users aged 55 or older now actively use tablets, too. The latest instalment in a series of analyses by eNET – Telekom, titled “Report on the Internet Economy”, focuses on “young people” over 55 years of age.

Missed out and left behind?

According to 2011 census figures, almost one third of Hungary’s population is aged 55 or older. This significant age-group, encompassing some three million people, is the most endangered by “digital exclusion”; while most young people are now either socialized in the world of computers and the Internet (“digital natives”) or have actively learned to use such devices and tools (“digital immigrants”), this new medium is rather unknown to most people over 55. Older people are usually afraid of the unknown when it comes to computers and the Internet, even though they would probably find the wealth of online information useful in their everyday lives, and could keep in touch with friends and relatives easier. According to the results of the Hungarian National Literacy Survey (hereinafter: NLS) based on responses by 25,000 people, a mere 25% of Hungarians older than 55 used the internet in the second quarter of 2013, whereas the national average (in all age-groups) was a much higher 61%.

Computer and Internet usage above 55

A minority of the 55+ generation have already recognized the opportunities offered by computers and the Internet, and approach new technologies with increasing courage and interest. The older generation seems rather divided in this respect: some feel that they are hopeless, while others use computers routinely in their everyday lives and consider digital devices as normal tools.

According to the eNET survey, one in four Hungarians above 55 years of age uses a computer, whereas the same indicator is three in four in the younger generations. Thus the difference is threefold, i.e. seniors represent a huge reserve; if they could be involved, the number of Internet users could be boosted. Pursuant to a survey by the National Statistical Office in 2012, 71% of those people aged 55+ who are already computer users use them every day. This ratio is lower than the 88% measured in the 16-24 age-group, but daily computer usage still dominates in both age-groups. The difference between them, probably arising from their lifestyles, lies in the location: youth aged 16-24 use computers at several locations (home, school or university, friends’ homes etc.)

Internet usage regardless of age

The NLS also examined Internet usage habits in individual age-groups: how long people have been surfing the Net, and how often and how long they are online. The majority of Internet users older than 55 have been using the Internet for up to six years.

Overall, senior people spend less time surfing the Net than the population as a whole. Almost one third of people who are older than 55 years spend up to five hours at the computer screen a week.

An online survey conducted by eNET in September 2013 indicates that only 31% of Internet users older than 55 have a smartphone. The devices used for certain activities (listening to music, using social media, e-mailing, news reading, searching for information, browsing) represent a difference between juniors and seniors: younger people use both computers and phones (including conventional mobile phones) equally, while persons above 55 years prefer computers.

People older than 55 years generally keep their distance from new technologies because they feel insecure and lack the required knowledge. Consequently, their approach to new gadgets is usually much more conservative than the younger generations’. eNET has examined how open Internet users above 55 years of age are to “smart” devices (including smart phones, tablets, smart watches and smart TVs). Those seniors who are already familiar with computers and the Internet are also interested in new technologies, or at least they are willing to try them. As to the currently very popular tablets, 10% of the respondents above 55 years of age claimed to use them; and within this group, tablet usage is frequent amongst people who have been surfing the Net for more than 15 years. Considering that 18% of the respondents below 55 years of age use tablets, the 10% level in the advanced age-group is quite remarkable.

About 47% of senior respondents in eNET’s online survey would definitely try a tablet, and 15% of them would like to buy one. Interestingly, 55+ people who have used the Internet for only 1-3 years are not really interested in tablets, as opposed to long-time Net surfers. This may be attributable to the fact that the latter people are more confident in the world of computers and the Internet, and have more courage to expand its horizons.

Internet users of the future

The Internet offers benefits and opportunities to everybody regardless of their age, so it is worthwhile to get acquainted with the online world. People older than 55 are definitely a group where the usage of the Internet and various information and communication devices can be expanded. Senior people’s willingness to go online is influenced by several factors such as education level, income, and the general activity level. It should also be noted that few of these people speak or read English, so international content is not interesting to them. In order to increase the time they spend online, high-quality Hungarian content in matters interesting to seniors should be made available on the Internet.

Tablets could also be helpful to older people because they are simpler to use than full-fledged computers, and usually cost less. And the pinch-to-zoom feature can be beneficial to those with poor eyesight.