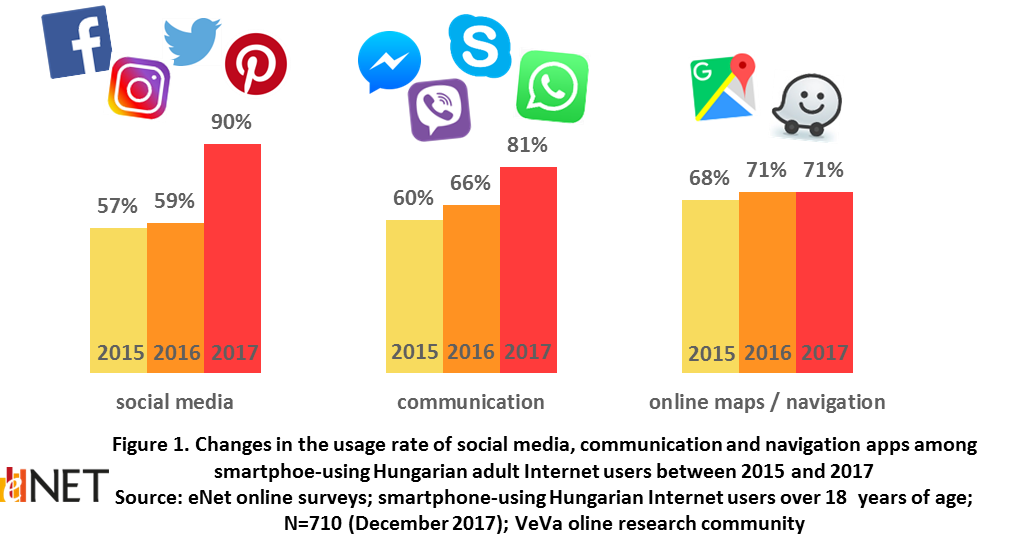 4.7 million people in Hungary report using a smartphone, accounting for 85 percent of Hungarian adult Internet users. More than 3.7 million among them also use mobile Internet on their devices. However, no data plan can be unlimited enough when it comes to smartphone users’ favourite apps – social media, communication and navigation. The latest “Report on the Internet Economy” by eNET – Telekom focuses on smartphone and mobile Internet usage.

Based on the online research conducted by eNET in December 2017, 85 percent of adult Hungarian Internet users report using a smartphone – representing around 4.7 million users. The popularity of mobile Internet is also quickly increasing among them: more than 3.7 million people use mobile Internet on their devices.

According to eNET’s earlier study conducted between June and July 2017, mobile phones have become the most widely used devices among Internet users for going online. Even though half of mobile Internet users have a contract that provides them with more than 1GB of data monthly, running out of data seems to be a common experience. This might be the reason why two-third of subscribers tend to use Wi-Fi when given the opportunity, especially for activities requiring heavy data traffic. Using Wi-Fi is relatively easy to do, as most smartphone users have access to unlimited Internet at home, and a Wi-Fi router to distribute signal to their devices. Free Wi-Fi access is becoming more widespread across public places, too. Wi-Fi usage is generally reduced when changing to an unlimited mobile data plan.

According to data collected by eNET in December 2017, the three most popular types of apps are apps for social media, communication (messaging, chat, video calls) and navigation, used by 90, 81 and 71 percent of smartphone users respectively.Social media websites experienced the last three years’ largest increase (33 percent point) in the number of smartphone visitors, followed by communication apps with an increase of 21 percent point. The usage rate of navigation apps have not changed significantly since 2015; their place in the no. 3 most popular apps have proved stable.

Social media above all

Social media apps seem to be an all-round favourite: not only are they used by the largest number of people, they are also used the most often, compared to other apps. Three-quarter of smartphone users use them at least daily – 8% of them hourly, 54% more than once a day, and 13% once a day.

The most popular activities on social media sites are reading the news (66%), chatting (60%), voting /liking (59%), posting images (37%) and commenting (33%).Among social media apps, there’s no defeating Facebook: 86% use it on their smarthphone (71% at least daily), while Twitter is used by 22, and LinkedIn by 16 percent of smartphone users. In terms of photo sharing, Instagram takes the lead with a usage rate of 34%, along with Pinterest (25%) and Snapchat (13%).

Online messaging has undeniably taken over texting: seven out of ten online chat-app users would rather communicate via online messages than SMS. Online messaging apps are mainly used with friends and family, although 41% reports using them with collegues as well.

Sending messages online does not generate a large data traffic in itself. However, users of these services do not limit their communication to words only: 89% send photos, 55% stickers, 46% emoticons, 41% articles and 39% videos. Nearly two-third of subscribers also use these apps for online phone calls.

Facebook also leads the field of online messaging apps: 80% of Hungarian smartphone users send messages via Messenger installed on their phone – 62% do so at least daily. FB Messenger is followed by Viber (62%), Skype (39%) and WhatsApp (20%) in popularity.

No navigation, no road trip

Navigation apps are used at least weekly by nearly half of all respondents, mostly for longer trips. Of all users of navigation apps, 58% choose an app displaying live traffic data – a feature considered extremely useful by 92% for avoiding traffic.

Google Maps is the most popular navigation app among Hungarian users (77%), followed by Waze (36%).

A recent emergence of unlimited, and unlimited thematic* mobile data options marks a new era on the Hungarian telecom market, allowing users to take full advantage of the opportunities offered by popular social media, online communication and navigation apps. It can also become a contributing factor to the further spread of mobile Internet usage in Hungary.

*Unlimited thematic options include usage of certain apps without the associated data traffic counting towards the subscriber’s data limit.About the surveys referenced in this article: eNET queried Internet users over 18 years of age about their smartphone and mobile Internet usage in 2015, 2016 and 2017. The survey was conducted via the online research community veva.hu (short for Véleményem Van – „I have an opinion”). The results are representative of the views of Hungarian internet users aged 18+ in terms of gender, age and region. The following researches were conducted: