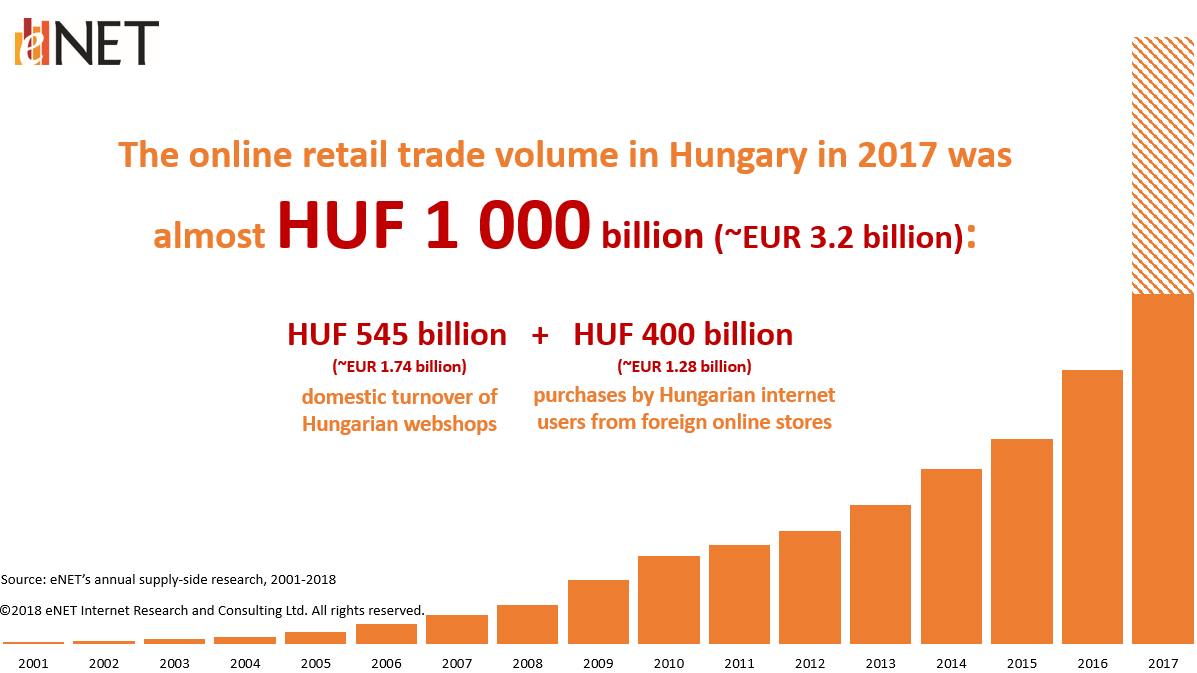 The net volume of online retail trade in Hungary exceeded the HUF 500 billion milestone in 2017, totalling HUF 545 billion (~EUR 1.74 billion) in the entire year. The e-tail sector boasted more than tenfold growth over 10 years, rocketing from HUF 46 billion to 545 billion (from ~EUR 0.15 billion to ~EUR 1.74 billion at current prices). The latest figures are based on webshops’ annual reports for 2017, published by the end of May. In what is now a tradition, eNET announced the latest e-tail data at the 15th Hungarian Ecommerce Conference.The online retail market expanded by a significant 27% in 2017 compared to 2016. The sector’s share within overall retail trade increased further, to 6.2%; this ratio is more than 50% higher than three years earlier. When it comes to online shopping, information and entertainment electronics, general and sports clothing, as well as toys and presents rule the roost; for years, these product categories have generated the highest online turnover figures. The fifth largest product category is now furniture, home textile and lighting, ousting household machines and white goods from the top five.Most online ordered goods delivered by couriers

Both the number of online shoppers and the frequency of online shopping have grown steadily in the past few years. The number of online shoppers has increased by 900,000 in Hungary since 2015, with 300,000 customers joining the club last year only. But Hungarians do not like domestic webshops only; the wide product range and good prices of foreign online stores appeal to more and more online shoppers. Since 2015, the number of Hungarians ordering goods from abroad has risen from 1.5 million to 2.7 million, and half a million of those people were registered last year. For that reason, eNET estimated for the first time the value of the goods bought by Hungarian internet users from foreign online stores over one year. In 2017, that volume could come to HUF 400 billion (~EUR 1.28 billion), almost as much as the total domestic online retail trade volume in 2016 (which had been HUF 427 billion, approximately EUR 1.39 billion). So last year only, Hungarian online shoppers spent almost HUF 1,000 billion (~EUR 3.2 billion) online. Not all of that amount went to domestic e-tailers, but it greatly affected them, just like the country’s economy as a whole.

The expectation expressed in eNET’s research conducted in this January, namely that the share of trade volume in November and December would decrease, seems to have come true. Though the overall e-tail sector grew nicely, the share of trade volume in the last two months of the year lagged behind the previous year’s level. In 2016, that period (i.e. Black Friday and Christmas) had accounted for 31% of annual e-tail turnover, but that figure went down to 27% last year.

eNET predicts that the fast growth of Hungary’s e-tail sector will continue in the coming years. In five years, online retail trade can be doubled, overtaking the HUF 1,000 billion inland retail volume.

The survey was conducted by eNET in January and May by interviewing Hungarian webshops (retail webshops accepting orders via a Hungarian-language home page). Businesses only selling services online were excluded from the research.

Definition of a ‘webshop’: store selling goods via the Internet using online ‘carts’.

The consumer e-commerce survey was conducted by eNET in May 2018 amongst regular Internet users over 18 years of age.