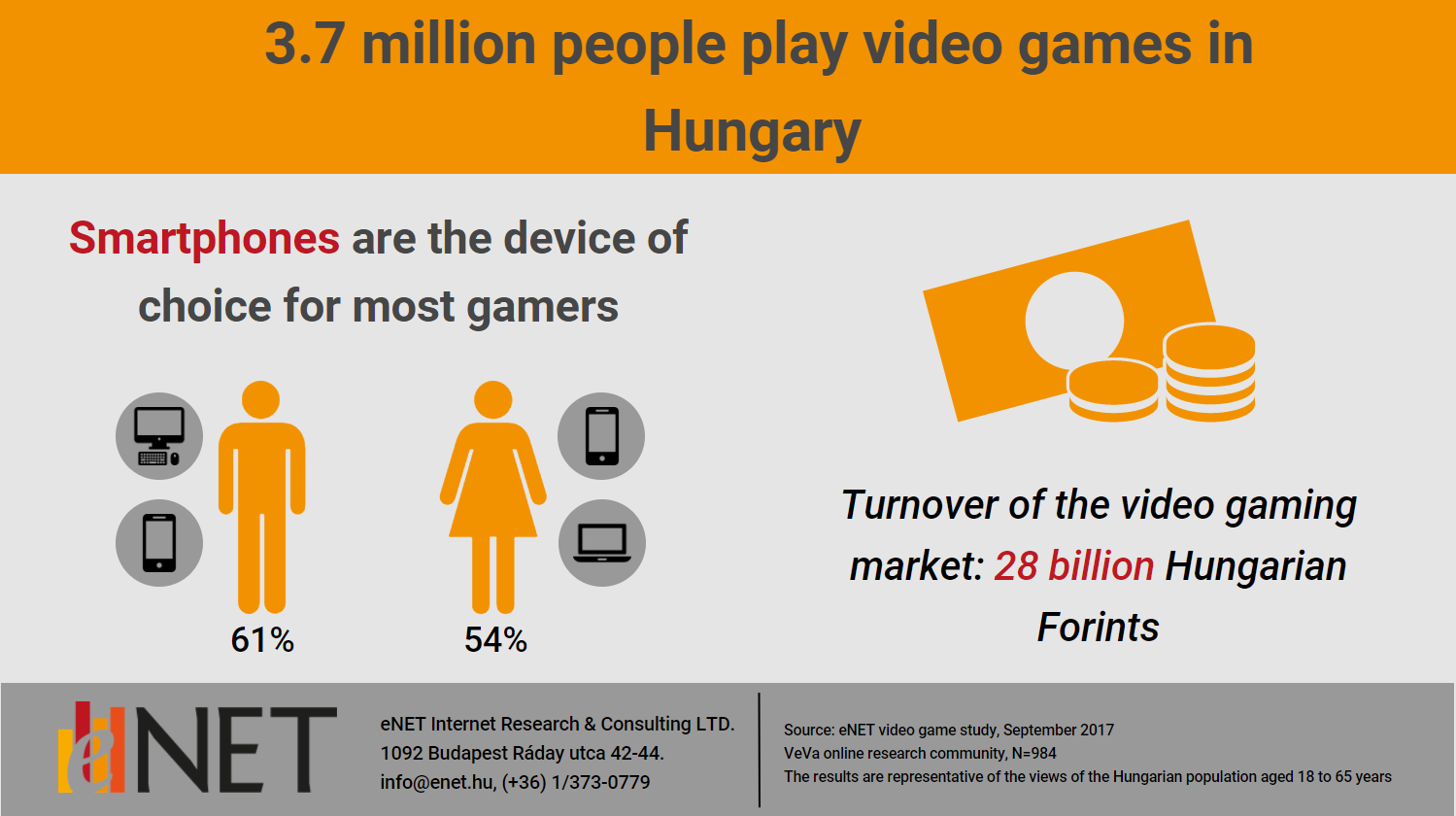 3.7 million people reported playing some sort of video game in 2017, which constitutes 58% of the Hungarian population between 18 and 65 years of age. Last year the turnover of the sector – including video game, hardware and in-game purchases – exceeded 28 billion Hungarian Forints. There is a steady income of reinforcements, too: more than half of all children play some kind of video game, according to eNET’s latest research on gaming.A typical Hungarian video gamer

As concluded in eNET’s 2016 study on video gamers, there is an increasing number of video game players in Hungary. However, society falsely equates them to hardcore gamers. eNET’s research defined video gamers as anyone playing any kind of online or offline game on some sort of digital device. According to the results, 61% of men and 54% of women engage in this activity, and it is the most popular among 18 to 25 year olds. In terms of time spent, it can be concluded that playing video games is not a high priority for Hungarian gamers as they only play 1 to 2 hours on average per week. Only 4% of videeo gamers play more than 20 hours a week. Card, word and strategic games continue to be the most popular.

Smartphones are the device of choice

In terms of devices, smartphones continue to dominate the field, as most video games are played on this device. Penetration of smartphones among Hungarians aged 18 to 65 years is 78%; of them, 70% report playing games on their phones. The most prevalent smartphone games are word games, Solitaire, and Candy Crush Saga. The share of games developed specifically for mobile devices (such as smartphones or tablets) is also constantly increasing. Among casual games, Candy Crush is still the top choice.

One in ten Hungarians reports owning some kind of console specifically designed to play video games. The most common of these is XBOX 360, being the coice of nearly half of all console owners. One in ten Hungarian gamers is planning to purchase a console in 2018. Nintendo Switch came to the stores at the end of 2017, and the XBOX One X has been available for purchase since November.Primary target group: young males

Children nowadays are born into a world intertwined with video gaming: the majority of parents are gamers, and the share of children who are themselves involved is also increasing. In 2017, 56% of children under 18 played video games. In terms of age groups, a quarter of under-fives, two-thirds of 6 to 10 year olds, and three-quarters of 11 to 18 year olds is reported to have been playing some sort of video game. Adults usually play to entertain themselves, and to unwind – but they are stricter with their children, only allowing them to play educational games if possible. Nearly half (46%) of the parents regulate the time their children can spend playing video games.

For youths, video gaming relocated from the living room to the arenas. As indicated by the success of video game tournaments and meetups, there is ample demand for such events in Hungary – a good example being the 2017 Xbox One PlayIT Show, which drew a crowd of thousands of people. Events like this are more than about video games: they also accomodate related activities targeting youth such as thematic concerts, opportunities to meet YouTube stars, and cosplay shows where participans can dress up as their favourite character.

Transactions on the video gaming market can be categorized into three groups: buying video games, in-game spending, and the purchasing of hardware and peripherals. One-third of players spend money on video games, one in every seven spends money in-game, and one-fifth buys hardware or peripherals specifically for gaming. Half of the gamers play online, and 30% download games from online application stores. Only one out of ten players buys games in traditional offline stores.

The world is a game

In the last few years, video games, gaming, and different aspects of gaming have been getting an increasing amount of attention on an international level. Video games / e-sport were named among the defining Internet trends of 2017 in KPCB’s 2017 report. Once a solitary activity, gaming has become the entertainment of choice for millions. And not only that: whether we look at learning, healthcare, scientific research or sports, video games are constantly proving to have a lot to offer.

Where is Hungary on the gaming map?

The largest gamer event of East-Central Europe, V4 Future Sports Festival was organized in Budapest between the 23rd and 25th of March 2018. The popularity of competitive gaming among young males in Hungary is constantly growing: by 2017, the population of the contry’s e-sport community has reached 420,000.

The results of eNET’s research on the Hungarian e-sport scene, the demographics of the gamers involved, the charactaristics of doing e-sport, and the equipment used are coming soon!

About the research: eNET interviewed 984 members of the online research community VeVa.hu in September 2017. The results are representative of the views of adult Hungarian population by gender, age and region.