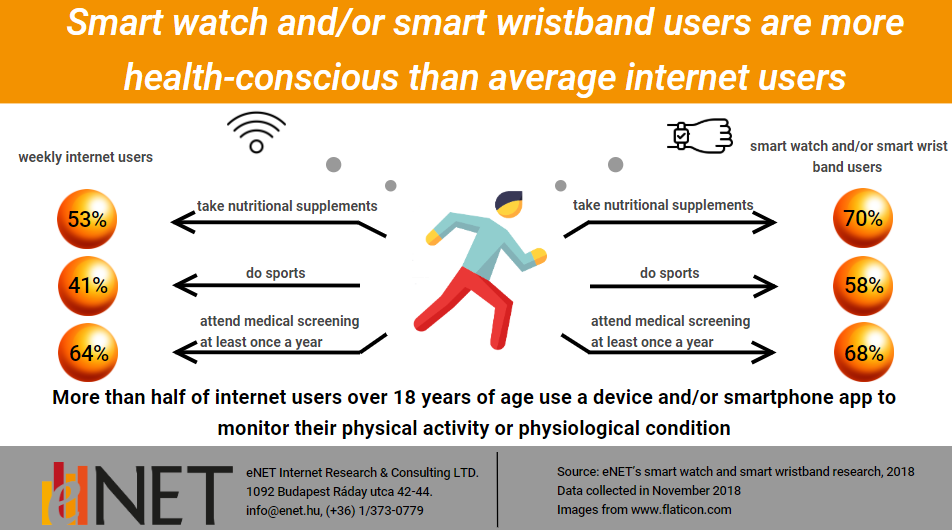 One in 10 adult internet users wears a smart watch and/or smart band, and one quarter use a smartphone application to keep track of their physical activities. Smart watch and/or smart band users are more health-conscious than others, attend medical screening more often, do more sports, and pay more attention to their diet. These are the conclusions of eNET’s research conducted in November 2018 about smart watches and bands.Half of all internet users monitor their physiological parameters

More than half of internet users older than 18 years used a device (such as a smart watch or activity meter) or application (e.g. sleep measurements via a smartphone app, or step counting) to monitor their physiological state in the past year. About 8% had tried such solutions but abandoned them, mostly because they did not need or did not use the data, or forgot to use the devices. About 2.6 million adult internet users monitor their activities in one manner or another; a quarter of them use a smartphone application, one third use conventional (non-smart) devices such as blood pressure or blood sugar meters, and one out of 10 respondents uses a smart watch and/or a smart band.

Among those who do not currently use any device, the largest group (18%) would be willing to try activity monitoring applications, followed by smart watches (13%) and a smart band (7%).

About 13% of men and 6% of women wear a smart watch and/or band. The ratio of people using smart devices on their wrists is the highest among residents of Budapest (15%) and students (16%).

Smart watch users appeared before smart band wearers; 42% started to use a smart watch more than a year ago, 32% within the past year, and 26% in the past half year. As to wristband users, 40% have been wearing the devices for more than one year, 20% for less than one year, and 40% for less than half a year. This is partly because generally more expensive smart watches were launched sooner. Lower-priced second- or third-generation wrist bands, which offer more or less reliable measurements, appeared in the past year. A change in shopping trends was the other reason for the difference.

As to the purchase method, a smart watch is usually given as a present; 60% of the owners of such gadgets have received them as presents (from a family member or friend, or bundled with a product for promotion purposes). Only some 40% have bought them for themselves. These ratios are reversed in the case of smart band wearers, 60% of whom have bought the devices for themselves.

Smart watch users prefer widely known major brands’ models, such as the Huawei Watch, the Samsung Watch, or the Apple Watch. This is reflected by the usage of major smartphone applications: most people opt for Huawei Health, Samsung Health, Nike+, or the Runkeeper app. But when it comes to wrist bands, the Xiaomi Mi Band is the most popular product. One fifth of the respondents do not know the make and model of their smart watch or band.

Two thirds of watch and wrist band users wear their devices every day. About two thirds of smart watches are worn in the daytime only, but 60% of smart band users keep their gadgets on in the night, while sleeping. The most widely used function of both smart watches and bands is step counting. Besides that, 45% of smart watch users launch and receive phone calls and read messages on their devices, and one third monitor their energy intake and heart frequency. Among smart band wearers, 60% monitor their sleep, and 60% also count the calories burned. Overall, the users are satisfied with these functions; what they miss most is blood pressure measurement.

Data collected, but is it used?

About 44% of smart watch users synchronise their data with a smart device or computer, but 38% just read the information on the small screen of their gadget. Concerning data usage, 70% of the respondents are simply interested in the information, 38% monitor their health, 10% gain data for their doctors, and 10% intend to increase their performance in sports.

Smart band owners use their devices more consciously: 68% synchronise their data, and only 23% read it on the built-in small screen. This is partly because of the diminutive screen of a smart band, which is less suitable for displaying detailed information. As to the purpose of data usage, 63% of the users are just interested in the information, 57% monitor their health, and 30% want to boost their sport performance.

According to 43% of smart watch owners, their devices do not influence their lives at all, while 26% perceive a significant impact on their lives. Regarding smart band wearers, 38% claim no influence on their lives, 41% see a slight impact, and 21% report a significant effect.Smart device users are more health-conscious

People who wear a smart watch or smart wristband do more for their health, and their physical condition is better compared to adult internet users in general. At least that is their own opinion. The difference is most prominent among people older than 40 years of age. Smart device wearers are more likely to do sports, take nutritional supplements and attend annual medical screening than all adult internet users. Specifically, 63% of smart wristband users do sports, which is an outstanding ratio. Some 56% of smart device wearers consider their health good or very good, while this ratio is 46% for adult internet users in general.

Smart watch and/or band owners are encouraged by their devices to engage in more physical exercise (for example walking) day by day. Smart watch wearers note that their gadgets make it easier for them to keep in touch as they are always available for calls and messages. Meanwhile, wrist bands promote the monitoring of general health, daily routine, and diet.

About the research: eNET interviewed 1351 members (internet users older than 18 years) of the online research community VeVa.hu in November 2018. The results are representative of the views of adult Hungarian internet users by gender, age and region.