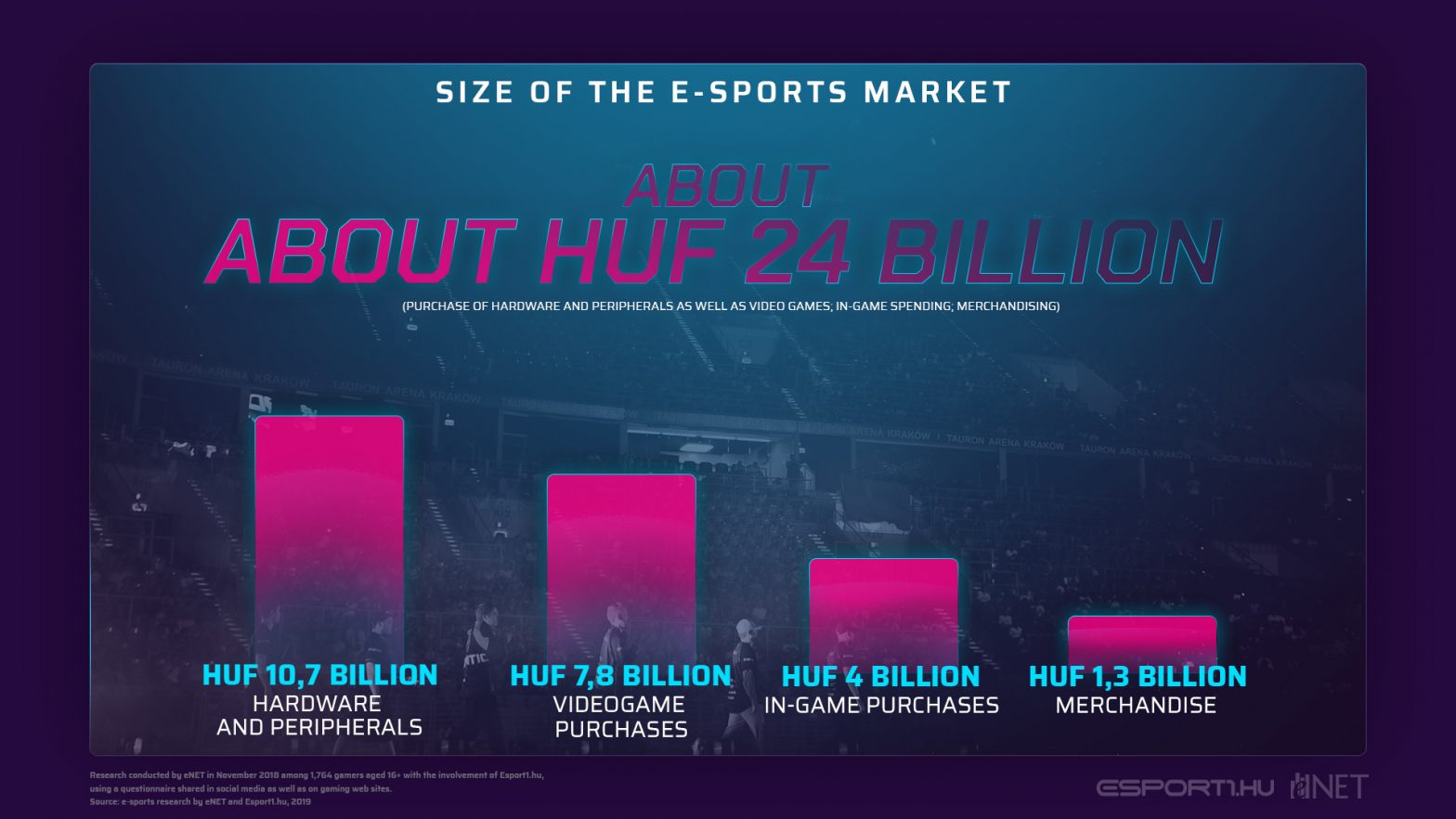 Whether or not competitive video gaming constitutes a sport is always debated. But meanwhile, the industry is growing, with a current annual turnover of HUF 24 billion in Hungary. As to the games played, PuBG and Fortnite are booming, just like in other countries. Concerning the platforms, the share of consoles is increasing. But this is not the only change compared to last year. What is the way forward, e-sport? Turn out the third e-sport research jointly conducted by eNET, Esport1 and Esportmilla.HUF 24 billion e-sport business in Hungary

For the third consecutive year, eNET has been investigating who Hungarian e-athletes are, what and how much these hardcore gamers play, and how much they spend. The total business volume generated by the e-sports sector comprises the following: the price of games; hardware and peripheral purchases; in-game spending; and merchandising (e.g. branded gifts and other articles). In total, hardcore gamers spent HUF 24 billion in connection with e-sports in these four areas last year.

eNET’s video game survey identified a HUF 42 billion overall trade volume in connection with Hungary’s video gaming market. Consequently, hardcore gamers make up only 10% of all video gamers, but they account for 60% of the sector’s total turnover. And which area can be the most grateful to e-sport? It’s hardware and peripheral manufacturers, as e-athletes forked out HUF 10.7 billion for their products last year. But video game companies can also rely on hardcore gamers, nine of out 10 of whom buy games (for HUF 7.8 billion in 2018), whereas only a minority of casual gamers pay for games.

Hardcore gamers are deemed to include those people who play e-sports competitively or otherwise, or have participated in offline e-sport events. Their number, currently estimated at 425,000 in Hungary, has not changed much in the past year, but their habits have evolved.

E-sports are mostly still played on personal computers, but the dominance of the platform is crumbling. Three years ago, 90% of hardcore gamers played on PCs, but now this ratio is down to 82%. Other gaming platforms, and specifically consoles and smartphones, are gaining ground: now 19% and 24% of e-athletes play on these latter devices, respectively. Consoles are expected to strengthen further, as one out of three gamers plan to buy a console in the near future.

LoL, CS:GO and Hearthstone are most popular among gamers, with PuBG rising to the fourth position. PlayerUnknown’s Battlegrounds (PuBG) and Fortnite were the clear winners last year. One out of six hardcore gamers plays Fortnite, a game released in the autumn of 2017. PuBG boomed too, and now occupies the fourth position, barely below Hearthstone. Regarding “classic” games, Dota is steadily losing followers; now only the most faithful play it.

About 11% of hardcore games can be considered competitors. They usually participate in online competitions but also play offline. E-sports are a big business worldwide, but few high-profile competitions with generous prizes are held in Hungary. Money is not the main motivation for Hungarian e-athletes, even though half of them do consider their passion as a way to earn money. But skill development, exceeding their limits and the competitive spirit are stronger factors to them, as these considerations drive 6-7 out of 10 competitors.

And what can we expect of those who do not (yet) play competitively? These people, too, have major ambitions because 40% plan to move up to the rank of competitive e-athletes sooner or later.