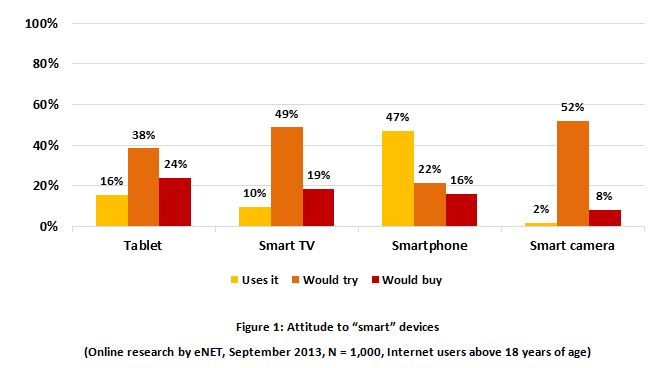 As much as 23% of the entire year’s online retail turnover is generated in the Christmas period. Just as last year, tablets will probably be the most popular presents under the Christmas trees in Hungary. The latest iteration of the research series by eNET-Telekom, titled “Report on the Internet Economy”, focuses on the Christmas shopping fever.

Each day takes us closer to the big Christmas shopping frenzy that awaits e-traders in the last two months of the year. According to this year’s e-commerce research by eNET, about 23% of last year’s total online turnover was generated in November and December. As this trend was mostly stable in the past two years, a similar ratio is likely in 2013. The boost in Christmas business is primarily attributable to the sale of more valuable goods; interestingly, the number of e-shopping transactions in the Christmas season was about one sixth of the annual total, i.e. not higher than in other two-month periods.

To buyers, the main advantage of purchasing goods on the Internet is the chance to save time and money. The number and value of year-end purchases indicates that Christmas buyers are the same people who regularly purchase goods online; they buy most of their presents online to take advantage of the above-mentioned benefits.

So it’s understandable that e-traders prepare for the Christmas rush as November draws close. This period gives many of them the chance to catch up or to survive further. Mainly small and young web shops benefit the most from the big Christmas spending.

The most popular product categories have not changed much in the past few years, apart from a minimal reshuffling. In terms of sales volumes, e-commerce is dominated by information technology, entertainment electronics, and books. However, while the turnover of computer equipment and entertainment electronics continues to increase, the sale of books is stagnating. The fourth and fifth place is occupied by toys and home equipment, respectively. But both of these categories expanded faster than the top 3, partly because the number of female buyers and their purchasing power are gradually rising amongst Internet users and online buyers. In fact, the number of female buyers may exceed that of men this year.

Over and above the product categories that generate the highest turnover figures, some emerging segments boast remarkable growth. These include clothing and beauty care products; while their total sales lag behind the top 5 categories, their potential is definitely remarkable and telling. Increasing demand for clothes and beauty products also indicates the growing presence of female buyers in Hungary. These product categories are expected to become even more popular in the near future.

In addition to traditionally sought-after high-definition televisions and smartphones, tablets are expected to remain amongst the most popular Christmas presents this year. The growing demand for tablets is partly attributable to changes in consumers’ needs. A tablet can be used anywhere and anytime, unlike laptops, which are less comfortable to use.

In an online survey of 1,000 participants conducted in September, eNET had examined how willing people were to try or even buy certain “smart” devices; the products asked about included tablets, smartphones, smart TVs and Internet-connected smart cameras.

Not surprisingly, more people would be willing to try than buy a device. These two values are the closest in the case of smartphones and tablets. Smartphones stand out as they are used by more respondents than any other of the examined devices; still, the number of people who foresee to buy a smartphone is not negligible. As to tablets, 16% of those polled have them, 38% would like to try them, and one in four people would buy them. Predictably enough, it is young people between 18 and 29 who are the most willing to buy a tablet. As the product range is quite varied, everybody can find a tablet of the right price/performance ratio.

Smart TVs, which offer an extended user experience compared to conventional televisions, were also very popular amongst the respondents. However, it should be noted that buying such a device puts a much higher burden on the family budget because tablets are available in lower price categories, too.

The survey indicates that it is smart cameras that people want to buy the least. But interest is definitely there, as proven by the fact that 52% of the respondents wanted to try these devices.

Payment on delivery by courier

The annual e-commerce survey conducted by eNET indicates no change in the popularity of payment and delivery methods compared to the previous years. Measured by the value of goods, payment upon delivery still dominates with 62%, even though the ratio declined slightly. While cash payment remains the most wide-spread, the share of buyers paying electronically in general and with bank cards in particular is growing. About 9% of the total value was paid by bank transfer and 4% by bank cards on the Internet.

Delivery methods did not change considerably, either: the share of delivery by courier grew somewhat, along with personal takeover at a contracted partner or in the seller’s shop. The rapid increase in the number of contacted delivery points (“Pick Pack Points”, “PostPoints”) has strengthened this delivery mode. These points are easily accessible by car as they are located at major traffic junctions, so they may occasionally be more favourable to buyers than a courier service or takeover in a physical store.

eNET estimates that the volume of online retail trade could reach HUF 200 billion (~ € 685 million) in Hungary in 2013. Based on the previous years’ data, this would mean a total Christmas turnover of HUF 46 billion (~ € 157 million).