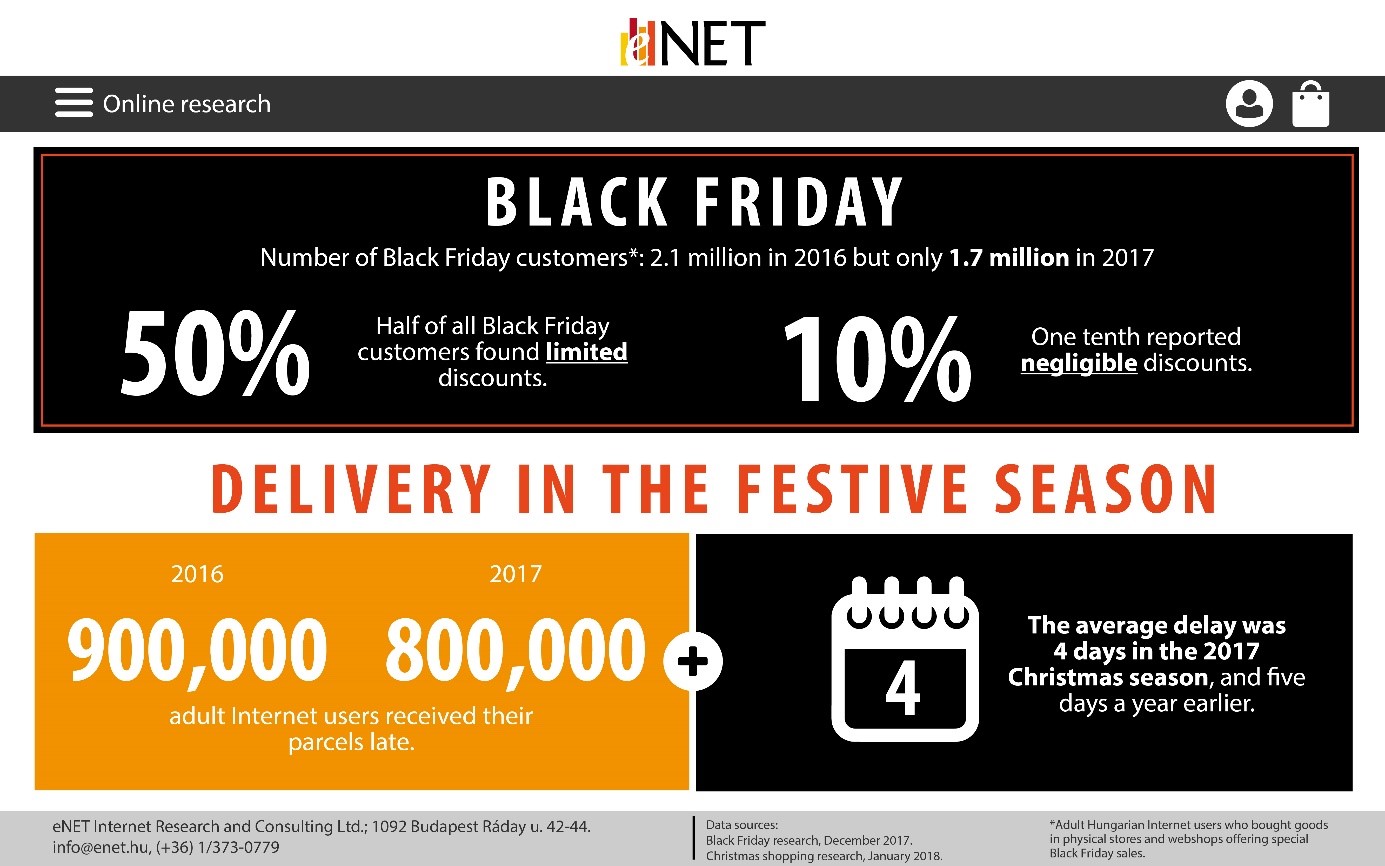 The online retail (e-tail) sector was shaken by the Christmas period in 2016. Even in January 2017, online news was all about delayed deliveries as 900,000 Hungarian Internet users received their parcels late. After the previous year’s difficulties, both webshops and logistics providers took stock of the situation and strove to avoid the recurrence of the issue at the end of 2017. All stakeholders were watching the performance of domestic webshops and courier services with high expectations, indicates the latest survey by eNET Internet Research conducted in December and January.

Fewer adult Hungarian Internet users claim to have bought goods in last year’s Black Friday offers than a year before; their number went down from 2.1 million in 2016 to just 1.7 million last year, even though a survey conducted before Black Friday had found that twice as many people planned to jump at the discounts in those days. The sales volume lagged behind the expectations, too; Black Friday had been expected to bring HUF 120 billion (~EUR 0.39 billion) in sales, whereas the actual figure was only half of that.

One reason could be that half of customers found limited Black Friday discounts both in physical stores and webshops, and 10% reported only negligibly lower prices. In fact, a minority of 7% (equalling 2% of adult Internet users) claimed that the discounts were not based on the latest prices but on previous (higher) prices. Nevertheless, this did not deter people from buying goods in the Christmas season. At the end of last year, 90% of adult Internet users purchased Christmas presents online (3.7 million) or offline (4.9 million), forking out HUF 234 billion (~EUR 0.76 billion) in total. About 42% of that amount (HUF 98 billion, ~EUR 0.32 billion) was spent online, and 58% (HUF 136 billion, ~EUR 0.44 billion) was paid out in offline shops.

But what did online shoppers before Christmas actually perceive? Two thirds of adult Internet users heard about the measures taken by the Hungarian Post before the Christmas holidays. Many of them considered these steps fair (40%) and effective (38%).

But it wasn’t only the Hungarian Post who prepared for the festive season but almost all delivery companies. Still, some online buyers could no longer order their goods with pre-Christmas delivery, and delayed their orders from foreign webshops to the period after Christmas. Their share was 14% and 13% of online Christmas shoppers, respectively. And one in five people found unusually high fees charged for pre-Christmas delivery. A slight majority (52%) of those who had heard about the measures aimed at addressing delivery bottlenecks said that those steps failed to fully resolve the issue in themselves.

In the 2017 Christmas season, fewer people received their parcels late than one year earlier. Some 800,000 online buyers got their goods late from couriers or at delivery points / parcel dispenser machines, while this figure had been 900,000 a year earlier. But the delays were shorter than in 2016, decreasing to on average of four (from on average of five) days. Still, 13% of customers (up from 12% in 2016) were still waiting for their parcel in the first week of January.

As before, those who suffered delays blame webshops and courier services to an equal extent. The delays and limitations did not change most people’s (65% compared to 61% a year earlier) views of online shopping.  About 27% (just as a year before) claimed that they would make their purchases earlier, 7% (11% in 2016) will no longer order goods in the festive season, and a mere 1% (the same ratio as a year before) said that they would never again buy anything over the Internet.Not so big bang

For several years now, Black Friday ushered in the Christmas season. But last year’s Black Friday turnover lagged behind the volume registered in 2016 or projected before the shopping season. This is attributable to meagre Black Friday discounts as well as delivery limitation measures. But it’s also possible that Hungarian online shoppers were more careful after the previous year’s experiences and the widely reported complaints, and brought their purchases forward.

Despite the delays, the 2017 Christmas season was not plagued by as severe delivery problems as the year-ago period. After the lessons learned in 2016, most online shoppers accepted that items ordered just before Christmas could arrive late. This was no longer news and caused no further measurable uproar, despite the fact that the normal delivery periods were once again frequently exceeded.

On the other hand, the steps taken to prevent delays did concern people. Feedback indicates that these measures curbed e-tail trade in the Christmas season as fewer potential customers ordered goods. In previous years, 30-31% of the total annual online trade volume had been realised in that period of the year (1 November to 31 December). Last year’s figure will not be known until May 2018 because of the need for final balance sheet data.

Year-end developments indicate that both webshops and economic players would do well to find long-term solutions to the challenge posed by the increasing number of online orders towards the end of the year. Logistics should better support the dynamic growth in online trade, and thus improve customer satisfaction.

The press release is based on two surveys conducted by eNET:

The surveys were conducted in the online research community Veva.hu. The results are representative of the opinions of Hungarian Internet users aged 18+ by sex, age and region.