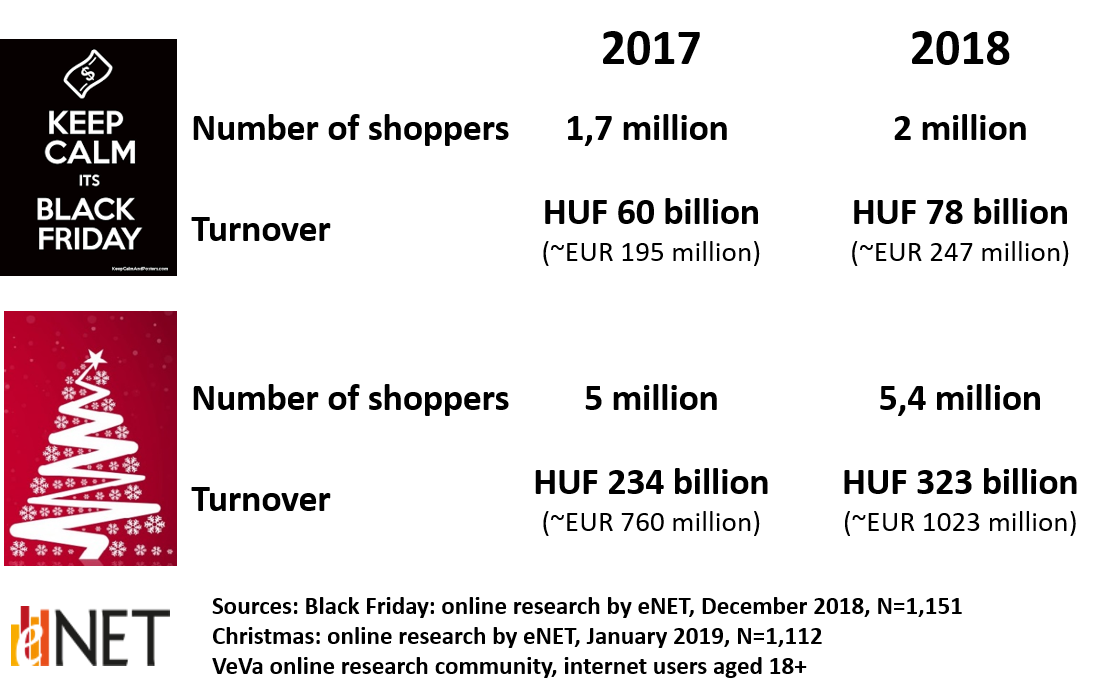 The holiday season at the end of 2018 has proved commercially successful: the turnover generated on Black Friday only (including online and offline transactions) was close to HUF 78 billion (~EUR 247 million), while the total Christmas shopping period may have brought a HUF 323 billion (~EUR 1023 million) trade volume according to eNET’s surveys conducted in December 2018 and January 2019. But areas remain where the customer experience could be improved, along with the results of the season. As to Black Friday, pricing could be fine-tuned, while delivery on time remains a challenge in online shopping for Christmas.Black Friday and Christmas generate almost HUF 78 billion (~EUR 247 million) and 323 billion (~EUR 1023 million) turnover, respectively

The festive season of 2018, laden with shopping and special offers, may be behind us as private persons, but last Christmas was an important period to merchants. It’s time for them to take stock of the last weeks of 2018 and incorporate the experiences in planning the year ahead. But how was the Black Friday and the overall Christmas season of 2018?

Let’s see the figures. A survey conducted by eNET in early December, following Black Friday, indicated 2 million shoppers and a HUF 78 billion (~EUR 247 million) turnover. One year before, Black Friday sales had been estimated at HUF 60 billion (~EUR 195 million), so the amount went up by over 20%. Meanwhile, the number of shoppers rose from 1.7 million in 2017 to 2 million last year. Thus it’s a foregone conclusion that Black Friday now has a stable place in the calendar of shopping in Hungary; both distributors and webshops would do well to keep their eyes on this year’s Black Friday.

And how about Christmas? As the prime festive period of the year, Christmas shows a true picture of shopping habits. About 400,000 more people purchased Christmas presents (online and offline) in 2018 than in 2017, and cart values grew as well. Last year, almost HUF 100 billion more was spent on Christmas presents than in the previous year.Internet users have mixed feelings about Black Friday, but are used to Christmas delays

So the year-end period was successful for merchants. But how did customers feel?

The sniffing at Black Friday could be attributable to the pricing strategy applied, i.e. that merchants do not really offer major discounts. Of those who checked out the special offers, 27% found significant discounts, but 44% reported only moderately lower prices. In fact, 24% claimed negligible discounts, and 16% indicated that the “discounts” were not deducted from the last price of a product but from a previous (higher) price. These observations can significantly deteriorate trust in Black Friday.

And how about Christmas? After the big parcel delivery fiascos of 2016, the Hungarian Post prepared for the holiday season carefully, introducing administrative limitations in order to shear off the Christmas spike in business. Webshops supported these measures. Still, late deliveries affected 800-900 thousand online shoppers at the end of every year since 2016. (This number was 870,000 at the end of 2018.) This no longer elicits much media response, so the issue seems to have become an accepted part of online shopping habits in Hungary. But even though customers may have adapted to the situation, that’s not the way things should be or remain.

It’s obvious that both Black Friday and Christmas perform well commercially. Nevertheless, both online and conventional shops have more work to do in order to make the year end shopping a clearly positive experience to customers: Black Friday pricing strategies should be reconsidered, and seasonal challenges in delivery should be tackled.

This press release incorporates two surveys. eNET interviewed 1,151 members (internet users older than 18 years) of the online research community VeVa.hu in December 2018, and 1,112 in January 2019. The results are representative of the views of adult Hungarian internet users by gender, age and region.